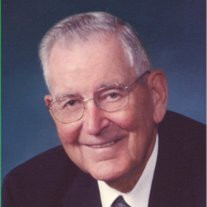 Dr. Wymond B. Wilson, 92, North Manchester, formerly of Mentone, passed away at 6:25 p.m. Sunday, June 2, 2013, at Peabody Retirement Community, North Manchester. He was born March 17, 1921, in Steuben County, to parents Harvey and Bertha (Boyer) Wilson. He married Arleda 'Leda' Hemry in Pleasant Lake, Steuben County, on June 27, 1953. She preceded in death on June 29, 2012. Dr. Wilson was a general practitioner in Mentone from 1954 to 1991. He also worked with Woodlawn Hospital (1954-1962), Murphy Medical Center (1954-1976), Kosciusko County Board of Health, Kosciusko County Medical Society, board of directors and on staff of Kosciusko Community Hospital, medical director at Miller's Merry Manor, of Warsaw, and the board of directors of the Mentone Farmers State Bank. He graduated from Pleasant Lake High School in 1939. He then attended Giffin Junior College, where he played basketball. In 1942, he began his service to his country in the United States Air Force. Wymond then received his bachelor's degree from Indiana University in 1949, and his Doctor of Medicine degree from Indiana University in 1953. He served the community of Mentone for 37 years. He was a member of the Mentone United Methodist Church, where he served on the administrative board. He was a member of many Mentone organizations, such as the Masons Lodge, Lions Club, Flying Club, American Legion, Chamber of Commerce, Bell Aircraft Museum Committee, Warsaw Elks and the Tippecanoe Valley School Board. He loved Indiana University basketball and football. He attended games for many years and was a member of the Varsity Club. In addition, he enjoyed spending time on the golf course. He is survived by his brother, Wilbur Wilson, North Manchester. He was preceded in death by his wife, Arleda 'Leda' Wilson; and an infant sister. Funeral service is at 3 p.m. Sunday, June 9, 2013, at King Memorial Home, Mentone, with Pastor Amber Karkosky-Litten officiating. Visitation is 2-3 p.m. Sunday at the funeral home. Burial will be in Mentone Cemetery, Mentone, where military graveside rites will be performed by the American Legion and Veterans of Foreign Wars, both of Warsaw. Memorial contributions may be made to Mentone United Methodist Church.

The family of Dr. Wymond B. Wilson created this Life Tributes page to make it easy to share your memories.

Send flowers to the Wilson family.