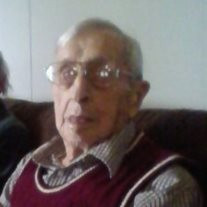 Jan. 29, 1920 - March 8, 2014 William L. "Bill" Dawalt, 94, Rochester and formerly of Macy, passed away at 7:10 p.m. Saturday, March 8, 2014, at Millers Merry Manor of Peru. He was born on Jan. 29, 1920, in Miami County, to Wm. Irwin and Grace O. Kerschner Dawalt. On Nov. 21, 1940, at his soon-to-be wife's parent's house, he married Emma Mae (DeHaven) Dawalt. Bill was a dairy farmer in Miami County with his wife prior to moving to Lake Manitou in 1979. Bill was a 1938 graduate of Gilead High School. He was a member of the Ebenezer United Methodist Church, the Order of the Eastern Star, Moose Lodge of Rochester, Lincoln Masonic Lodge 523, and a past member of the Manitou Lake Association. He also was on the REMC board in Miami County and on the school board when the North Miami school was built. He thoroughly enjoyed playing cards with friends and family, bowling, as well as fishing. Survivors include a son, David and wife Renee Dawalt, Twelve Mile; two daughters, Grace and husband Kenny Richardson, Macy, and Patty and husband Chris McGurie, Mexico; eight grandchildren, Stacey and Tony Dawalt, Mindee (Richardson) Turner, Wendy (Richardson) Green, Rachel Merrix, Chris McGuire, Jon and Mark Merrix; 18 great-grandchildren and ten great-great-grandchildren. Bill was preceded in death by his wife, sister Edna Derck and brother Earl Dawalt. Visitation will be 5:30-7:30 p.m., today at Hartzler Funeral home, Akron, with Lincoln Masonic Lodge 523 service to follow visitation at 7:30 p.m. Visitaion is also, one hour prior to service on Tuesday at Ebenezer United Methodist Church. Funeral service will be conducted at 11 a.m., Tuesday, March 11, 2014, at the Ebenezer United Methodist Church, 1100 North and Meridian Road, Miami County, with Reverend Bill Babb officiating. Burial will be in the Ebenezer Cemetery, Macy. Memorial contributions may be made to the Ebenezer United Methodist Church. Online condolences may be expressed at www.hartzlerfuneralservices.com.

The family of William L. "Bill" Dawalt created this Life Tributes page to make it easy to share your memories.

Send flowers to the Dawalt family.