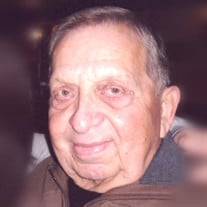 William E. "Bill" Gearhart, 91, of Akron, Indiana left to be with his Lord on Friday, Feb. 7, 2020. Being 1 of 18 children, Bill understood what it meant to be a family. Growing up together in a big household, Bill and his siblings have many stories to share of mischief, laughter, and lots of love. Still carrying on the Gearhart legacy are his sisters, Dorothy, Ruth, Sharon, and Joan, and his brothers, Larry and Roger. In February of 1951, Bill married Phyllis Gearhart, whom he loved dearly. They planted roots in Akron where they shared their life and love with 3 wonderful daughters, Lynne (Larry) Kline, Janice (James) Saner, and Patti (Robert) Newman, whom all still live close by. Of all the things he had done, he was most proud of his daughters and their families. He was faithful at stopping by for a quick visit, showing up on every family birthday, and listening to or watching various sporting events while cheering on his grandchildren and great-grandchildren. Helping to carry on those traditions are grandchildren Bridget (Chuck) Bussard, Melissa (David) Belcher, Keith (Dacy) Newman, Tara Ott, Andrew Parker, Kristen (Tracy) Horrell, Jayme (Ashton) Patterson-Boocher, Amy Craig, Kayla (Kris) Hughes, and Alex (Breanna) Newman, along with 20 great-grandchildren and 3 great-great grandchildren. Bill served in the US Army during the Korean War. He was proud of his duty and service to the country. Upon returning home, he began working on the Erie Lackawanna railroad and fondly recalled his days of hard work. He was proud to be such a part of history. After his days on the railroad, Bill took up construction. He began building many houses in Akron, all which still look beautiful today and are a reminder to family and friends of his craftsmanship and legacy. In his later years, Bill also shared his life with his partner, Sue Daine, where he raised large gardens of vegetables and fruit to share with others, much like his parents did when he was growing up. He loved in such quiet ways, unless it was rooting on his faithful Cubbies or Indiana Hoosiers. You never talked to Bill or stopped by for a visit without a sports game being heard loudly throughout the house. Bill also had a fondness for taking his chances at scratch-off tickets and the casino. Bill was a master gardener. He was known for his many rows of vegetables that he not only ate himself, but gave away to family and friends. Most people would find a pint or two of tomatoes or a couple dozen ears of sweet corn sitting on their front porch steps and they knew that Bill had been there. Bill was a giver. He helped his friends, his neighbors, and his family. Whether it was showering his family with an abundant amount of gifts for Christmas when the grandchildren were little, or showering anyone with vegetables, or conversation, or a game of cards, or the simple candy dish that sat on his side table, he showed his love best when he gave to others. Family and friends may stop by and share their love and memories of Bill on Sunday, February 16 from 1 pm to 3 pm at the Akron Community Center 815 Rural Street Akron, Indiana. A Memorial Service will follow at 3:00 pm with military honors performed by the Fulton County Honor Guard. Memorials may be made in Bill’s memory to Tippecanoe Valley Middle School Viking Vittles Program. Arrangements are entrusted to Hartzler Funeral Home 305 West Rochester Street Akron, Indiana.

William E. "Bill" Gearhart, 91, of Akron, Indiana left to be with his Lord on Friday, Feb. 7, 2020. Being 1 of 18 children, Bill understood what it meant to be a family. Growing up together in a big household, Bill and his siblings have... View Obituary & Service Information

The family of William "Bill" E. Gearhart created this Life Tributes page to make it easy to share your memories.

Send flowers to the Gearhart family.