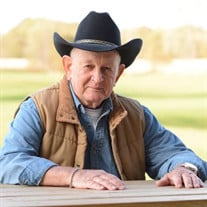 “Even though our earthly bodies succumb to cause and effect, even though questions remain, the advantage goes to the REDEEMED; eternity with our heavenly Father!!” Wilhelm (Willie) Henry Meyer, 80, of Warsaw, IN and formerly of the Algona, IA, Payson, AZ and Yates City, IL area, went to his home in heaven on Wednesday, December 1, 2021. Willie was born in Buffalo Center, IA on April 20, 1941. He was the first of two sons born to Henry and Erna (Krominga) Meyer. He lived in Lakota, IA until shortly after his marriage on March 30, 1963 to Martha (Marty) Jo (Eggum) Austin of Thompson, IA. The Lord blessed them with three great children and their spouses; Sherianne (Joe) Olson of Warsaw, IN; Douglas (Karen) Meyer of North Las Vegas, NV and Kirk (Tammy) Meyer of Manhattan, KS. Four grandchildren and bonus grandchildren would follow. Sierra, Dylon, Katie and Kallie Meyer have many fond and loving memories of their Opa. When Willie and Marty married, they headed directly to work on the farm. There were hogs farrowing and Willie’s parents were heading to Germany for a visit. Farm responsibilities trumped any honeymoon. After several years of being hailed out on the farm, Willie pursued many different adventures and opportunities in the next 53+ years. Among those opportunities were working on getting a veal calf business going; livestock business; possibly pursuing a veterinary career (didn’t go that direction); working for Bowman Builders; a contract with Cargill Inc. building concrete feeding floors and hutches for finishing hogs; another contract with Conn Land & Cattle Co. to build 32, 450 bushel cattle feeders; managing a chicken farm; building wrecker units that fit in the box of ¾ and one ton pickups; running a hog operation in Buffalo Center, IA from farrow to finish; manager of the local flower shop in Buffalo Center; drywalling (6-1/2 years of no vacation). Drywalling and construction led Willie to Arizona, to pursue his career there after a tornado hit Algona and work was scarce. While there, opportunities arose for Willie and Marty to become Motel 6 managers. They were able to travel to Colorado and Wyoming during this time and then ended back in the Phoenix, AZ area. Upon reconnecting with an old friend, Willie and Marty became apartment complex managers and maintenance managers. Unfortunately health issues came up for Willie and he and Marty needed another change. Through their daughter and son-in-law, they were blessed with the opportunity to do something they both dreamed about doing someday, working at a Bible camp. They packed up and moved to Yates City, IL and became part of the ministry of Faith Bible Camp. While at FBC, Willie and Marty had three special friends that they enjoyed spending time with – Audrey, Bella, Poliana, and Cowboy. They also acquired another “son”, Twig, and made many lifelong friends. Marty passed away in November 2017 and Willie was beginning to fail in his health, so in August 2020 he moved with his daughter and son-in-law to Warsaw, IN. This is where Willie would have his final earthly home. Willie and Marty faithfully served the Lord all of their days together. Their goal was to see others come to know the Lord as their Savior and even though they weren’t perfect, their lives reflected Jesus. And as the song goes and as Willie quoted quite frequently, “Heaven is better than this!” and someday soon we are going to make it home too, if we chose to follow the Savior. Proceeding Willie to heaven were his parents, his beloved wife, a nephew and his dearly loved brother, Gary Meyer. Left to cherish Willie besides his children and grandchildren are Frances Meyer, Judith Knudsen, Ramona Eggum, Tom (Sarah) Eggum, Rachel (Robert) Cinader, Joan (John) Skogen, Richard (Marisol) Eggum, Kelly (Rose) Austin, Shane and Dane Austin; along with many nieces, nephews and cousins. Memorials will go to Faith Bible Camp 849 Knox Rd 2200 E, Yates City, IL 61572, in memory of Willie. John 3:16; 2 Corinthians 5:8 No services will be held at this time. A memorial will be held at a later date in Iowa in his memory. He will be laid to rest in the Maple Hill Cemetery of Lakota, Iowa with his wife. The arrangements have been entrusted to King Memorial Home 101 North Tucker Street Mentone, Indiana. Memorials will go to Faith Bible Camp 849 Knox Rd 2200 E, Yates City, IL 61572, in memory of Willie. John 3:16; 2 Corinthians 5:8

&#8220;Even though our earthly bodies succumb to cause and effect, even though questions remain, the advantage goes to the REDEEMED; eternity with our heavenly Father!!&#8221; Wilhelm (Willie) Henry Meyer, 80, of Warsaw, IN and formerly of... View Obituary & Service Information

The family of Wilhelm "Willie" Henry Meyer created this Life Tributes page to make it easy to share your memories.

“Even though our earthly bodies succumb to cause and effect,...

Send flowers to the Meyer family.