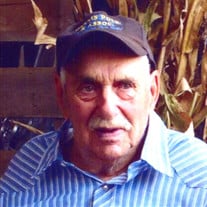 Wayne D. Kamp, 80, Akron, passed away at 9:49 a.m. Friday, July 3, 2015, at Parkview Wabash Hospital after being hospitalized Wednesday. Wayne was born Aug. 28, 1934, in Akron, to Walter and Iola (Wright) Kamp and was raised by C. Everett 'Red' and Elsie Dague Clark. He was married Sept. 27, 1952, in the Athens EUB parsonage to Isabelle Funk, and she survives. Wayne was a farmer and a carpenter and millwright, where he was in the union. He also was a seed corn salesman. He started out collecting old farm machinery and it turned into Kamp Salvage. His favorite thing was to go to farm auctions and ride around on the golf cart, talking and bidding with his favorite reserved number 16. Everyone at the sales were always looking for 'Wimpy,' which was the nickname he got from eating hamburgers. He was a member of the Echoes of the Past Power Show and attended the Olive Branch Church of God of Roann, where he was known as the door greeter. Wayne enjoyed going fishing with his family and friends and in earlier years he loved participating in tractor pulls as 'Ollie' with his Oliver 77. He enjoyed going out to eat all over the area and he never met a stranger. Kamp is survived by his wife, Belle Kamp, Akron; sons, Dennis L. (Linda) Kamp, New Carlisle, Steven Wayne (Tracy) Kamp, Akron, Franklin H. (Linda) Kamp, Akron, and Andrew J. (Lori) Kamp, Kewanna; daughter, Rebecca Sue (Mark) Powell, Macy; 24 grandchildren; several great-grandchildren; brother, Wendell D. Kamp, Harlingen, Texas; and several nieces and nephews. He was preceded in death by his grandsons, Jonathan H. ‘Popper’ Kamp and Wyatt Clarke Davis; sister, Francis Rosseau; and brothers, Myron Rex and Lester Kamp. Funeral services are 10:30 a.m. Wednesday, July 8, at Hartzler Funeral Home, 305 W. Rochester St., Akron, with Pastor Jeff Sumner officiating. Burial will take place in Athens Cemetery, Athens. Visitation is from 3 to 8 p.m. Tuesday, July 7, at Hartzler Funeral Home. Memorial contributions may be sent to Athens Cemetery or the Akron Lions Club.

The family of Wayne D. Kamp created this Life Tributes page to make it easy to share your memories.

Send flowers to the Kamp family.