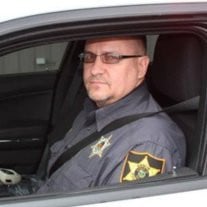 Timothy Ray Fleck, 49, Akron, passed away unexpectedly at 9:12 p.m. Wednesday, June 12, 2013, in Woodlawn Hospital's emergency room. He was born Nov. 13, 1963, in Wabash, to parents Ben F. Fleck and Sharon Gearhart Meenen. He had been the Akron town marshall since 1998, and he had been on the Akron Police Department for over 25 years. Before joining the Akron Police Department, he had been a deputy on the Fulton County Sheriff's Department. He was a 1982 graduate of Tippecanoe Valley High School and a 1992 Graduate of the Indiana Law Enforcement Academy. He was a member of the Henry Township Advisory Board. Also he was a member of the Fulton County and Indiana F.O.P. He had previously served on the Akron Library Board and was previously a member of the Henry Township Fire Department. Tim was an avid Notre Dame fan, as well as a Tony Stewart fan, and he loved John Deere. He enjoyed mowing and was very particular about his yard. Tim is survived by his fiance, Kelly Strahlem, Akron; three daughters, Cassandra Fleck, Akron, Hana Fleck, Peru, and Carrie Strahlem, Akron; three sons, Cory Fleck, Akron, Craig Fleck, Akron, and Sgt. Tyler and wife Katlyn Strahlem, Leavenworth, Kan.; mother, Sharon Meenen, Macy; grandchildren, Shaun Hinson, Leila Hinson, Brantley Strahlem and Halle Strahlem; sisters, Deborah and husband Brantley Bridges, Cary, N.C., Cheryl A. McCullough, Akron, and Linda and husband Frank Kamp, Akron; brother, Steve Fleck, Macy; several aunts and uncles; and nieces and nephews. He was preceded in death by his father, Ben F. Fleck; stepfather Howard 'Bud' Meenen; and nephew, Jonathan 'Popper' Kamp. Funeral service is at 10:30 a.m. Tuesday, June 18, 2013, at Akron Church of God, Akron, with Pastor Terry Canfield officiating. Visitation is 2-8 p.m. Monday, June 17, 2013, at the church. Burial will be in Akron Cemetery, Akron. Memorial contributions may be made to an education fund for Hana Fleck entrusted at Lake City Bank. Hartzler Funeral Home, Akron, is in charge of the arrangements.

Timothy Ray Fleck, 49, Akron, passed away unexpectedly at 9:12 p.m. Wednesday, June 12, 2013, in Woodlawn Hospital's emergency room. He was born Nov. 13, 1963, in Wabash, to parents Ben F. Fleck and Sharon Gearhart Meenen. He had been the... View Obituary & Service Information

The family of Timothy R. Fleck created this Life Tributes page to make it easy to share your memories.

Send flowers to the Fleck family.