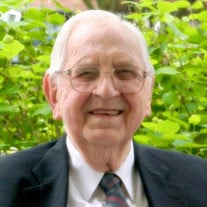 T R Jones, 100, of Mentone, IN, went to be with his Heavenly Father on Sunday, July 29, 2018 after a brief illness. He leaves behind his wife of 65 years, Louise Decker Jones; his sons Jim Jones (Teresa), Kent Jones (Kandi) and his daughter Lee Ann Jones Lamb (Jim Lamb); seven grandchildren; and 11 great-grandchildren. Born Sunday, June 9, 1918, in Calloway County, Kentucky, to James Washington Jones and Lee Douglass Jones, T R had two brothers and five sisters, all of whom preceded him in death. T R served as a medic during World War II in the 220th Medical Battalion, 20th Armored Division, United States Army. He volunteered as a conscientious objector and, in his words, “went to war with a Bible instead of a gun.” While stationed in Germany, France and Belgium, he often organized Bible studies with his fellow soldiers. After first meeting Louise at a church service in Murray, Kentucky, T R was deployed overseas. Five years later, while students at Murray State College, they ran into each other in the library. They were married in 1953. After graduating Freed-Hardeman College, Henderson, Tennessee and Murray State College, Murray, Kentucky, he served for 50 years as a minister in churches of Christ throughout Indiana, Illinois, Kentucky, Michigan and Tennessee. T R recently preached at Mentone Church of Christ, where he and Louise lived until his illness. Throughout his early ministry career, he also taught school in several communities. Loved by his family, friends and community, T R was always glad to answer a Bible question, tell a joke, or play a game of checkers. He also played the guitar, something he enjoyed doing at family gatherings with his son, Jim, and grandson, Jesse. Until a few years ago, he kept a large garden, and this year had been growing tomatoes. In June, family and friends from across the country joined T R to celebrate his 100th birthday. In a sermon he delivered that day, he said, “Just as Jesus lived only 33 years on the Earth, it is what we do in our time here, not how long we are here that matters.” In his long life, T R served God and loved his family. The funeral service will take place at 2:00 pm, Saturday, August 4, 2018 in the Mentone Church of Christ 110 N. Broadway Street Mentone, Ind. with Speaker David Mangum officiating. Burial will take place in the Mentone Cemetery following the funeral service. Visitation will be prior to the service starting at 1 pm also at the church. The arrangements have been entrusted to King Memorial Home 101 North Tucker Street Mentone, Indiana. Memorial contributions can be made to the Shults-Lewis Child and Family Services P.O. Box 471, Valparaiso, Indiana 46384. Share a Memory or send an Online Condolence at: www.hartzlerfuneralservices.com

T R Jones, 100, of Mentone, IN, went to be with his Heavenly Father on Sunday, July 29, 2018 after a brief illness. He leaves behind his wife of 65 years, Louise Decker Jones; his sons Jim Jones (Teresa), Kent Jones (Kandi) and his daughter... View Obituary & Service Information

The family of T R Jones created this Life Tributes page to make it easy to share your memories.

Send flowers to the Jones family.