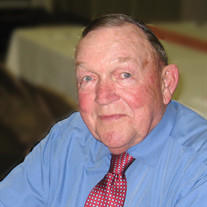 Stephen L. Hartzler, 83, of Akron, Indiana passed following a valiant effort to live, passed on to join his wife of 64 years at 6:35 pm, Tuesday, Jan. 19, 2016 at Memorial Hospital of South Bend, Ind. He was born on May 14, 1932 in Miami County, Indiana to Lester "Joe" and Helen Marie (Thompson) Hartzler. He was married on June 17, 1951 in the Athens EUB Church to Kathryn I. Walters, who preceded July 13, 2015. Raised on the farm, Steve’s first job was at General Tire in Wabash. He worked his way on to Sonoco Products Company of Akron, Indiana, where he retired as Plant Superintendent. During his 32 years at Sonoco, he and his wife raised their family while working their successful livestock and farming operation. His family’s involvement in 4-H led to a Hereford herd that they maintained throughout their lives. Steve moved from Gilead to the Akron area the summer before his senior year. He continued to play basketball and baseball at Akron High School before graduating in 1950. There he also met his future wife, Kathryn Walters. He started his political career as a Republican Precinct Committeeman. In 1980, he was elected as a Fulton County Councilman and later, a Fulton County Commissioner, where he served as President. He served on numerous political boards and was a current member of Fulton County’s Alcoholic Beverage Board. He was awarded a Sagamore of the Wabash. He also served on the 4-H Fair Board and Community Foundation Board. Steve and wife, Kathryn, were avid sports fans, having held season tickets at Tippecanoe Valley High School for the boy’s basketball games since the school’s inception, as well as having season tickets to the Notre Dame Women’s Basketball games for many years. Survivors and place of residence: Daughters – Stephenia Barkman – Rochester, Ind. and Melinda and husband Pete Pratt – Rochester, Ind.; a Son – Mark and wife Deb Hartzler – Akron, Ind.; Grandchildren – Melea Powell-Hoffer, Stephen Heinzmann, Stacey McGriff, Blaine Hartzler, and Ashley Marrs; Step Grandchildren – Stacy Barkman, Scott Barkman, Tara Wolfe, and Tabitha Floor; 19 Great Grandchildren, anticipating the birth a great granddaughter; a Sister – Patsy and husband Channing Utter – Akron, Ind.; and a Brother – Larry and wife Bev Hartzler – Akron, Ind. Preceded in Death By: Wife – Kathryn I. Hartzler on July 13, 2015; Parents - Lester "Joe" and Helen Marie Hartzler; and Brothers – Richard “Jack” and Jerome Hartzler Funeral services will be held at 10:30 am, Monday, Jan. 25, 2016 at Hartzler Funeral Home 305 W. Rochester Street Akron, Indiana with Pastor Phil Pratt officiating. The burial will take place at the Akron Cemetery, Akron, Indiana. Visitation will be from 2 pm to 8 pm, Sunday, Jan. 24, 2016 at Hartzler Funeral Home, Akron, Indiana Memorial Contributions to: Stephen and Kathryn Hartzler Memorial Scholarship entrusted at the Northern Indiana Community Foundation. Share a Memory or send an Online Condolence at: www.hartzlerfuneralservices.com

The family of Stephen L. Hartzler created this Life Tributes page to make it easy to share your memories.