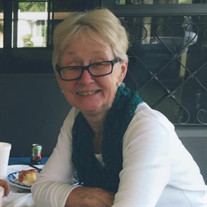 Sandra H. Stavedahl, 77, of Mentone, Indiana passed at 4:56 am, Sunday, October 10, 2021 at Peabody Retirement Community of North Manchester, Indiana. Sandra was born on Dec. 7, 1943 in Miami, Florida to the late Archibald and Mary Alice (Brandt) McArthur. She married on April 23, 1993 in Las Vegas, Nevada to Terry Stavedahl, he survives. She graduated from high school in New York. Sandra had been a supervisor in industrial manufacturing for many years. She had also been the manager at the Hotel at Amish Acres of Napannee, Indiana. Her most fulfilling job was a Teacher Supervisor at a faith based Day Care where she served many other roles. She loved camping with her family. She enjoyed watching sports, especially the Chicago White Sox and the Chicago Bears. Sandra was motherly and enjoyed nurturing everyone. She drew people to her with her take charge attitude and always made things easier for others. She is survived by her husband Terry Stavedahl of Mentone, daughter Tammy Richmond of Simi Valley, California, sons Travis and wife Dorothy Bouck and Tom Bouck both of Michigan, several Grandchildren and Great Grandchildren, daughter-in-laws Monica Bouck and Sheila Starling Bouck, sisters Wanda and husband Nick Genes of South Dakota and Patricia McArthur of Florida. Sandra was preceded in death by her parents, sons Troy and Todd, son-in-law Mark Richmond, and a sister Marylou Pelfrey. A memorial visitation will take place from 2 pm to 4 pm, Saturday, Oct. 16, 2021 at King Memorial Home 101 North Tucker Street Mentone, Indiana. Donations can be made in her memory to the donor’s choice of charity.

The family of Sandra H. Stavedahl created this Life Tributes page to make it easy to share your memories.

Send flowers to the Stavedahl family.