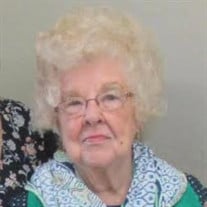 Ruth M. Tucker, 93, of rural Etna Green, Indiana passed at 8:11 am, Thursday, July 8, 2021 at Lutheran Hospital of Ft. Wayne, Indiana.   Ruth was born on March 8, 1928 in Columbia City, Indiana to the late Frank and (Hambleton) Bertha Long.  She married on April 18, 1947 to Joe Eugene Tucker, who preceded her in death on Feb. 11, 1992. She attended school in Columbia City. She later attained her cosmetology certification from Ravenscroft Beauty College. Ruth owned and operated Ruth’s Beauty Shop for many years. She was a member of the American Legion and Moose Lodge both of Warsaw. She enjoyed playing cards as well as quilting and crocheting. Survivors include her daughters Gloria Paseka of Etna Green and Cathy Ellis of Indianapolis, sons Steve and wife Kathy Tucker of Mentone and Kerry and wife Keni of Etna Green, 6 Grandchildren, 5 Great Grandchildren, and sisters Helen Warren of Atwood and Elsie Oliver of Ft. Wayne, Indiana.   Ruth was preceded in death by her parents, her husband Joe, 2 Grandchildren, 2 Sisters, a Brother, and a son-in-law Carl Paseka.   A private family graveside service will take place in the Harrison Center (Wooden) Cemetery of rural Etna Green, Indiana with Rev. Brad Miller officiating.   The arrangements have been entrusted to King Memorial Home 101 North Tucker Street Mentone, Indiana. Donations can be made in Ruth’s memory to Mary & Jerrys Helping Hands 10274 W 600 S, Mentone, IN 46539.

The family of Ruth M. Tucker created this Life Tributes page to make it easy to share your memories.

Send flowers to the Tucker family.