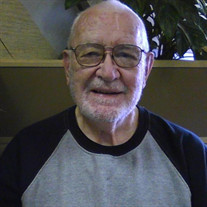 Russell Rex “Arkie” Yazel, 91, of rural Tippecanoe, Indiana passed at 7:30 pm, Thursday, July 8, 2021 at Grace Village Health Care of Winona Lake, Indiana.   Rex was born on Oct. 29, 1929 in Etna Green, Indiana to the late Clyde and Delta (Borton) Yazel.  He married on March 6, 1965 in Warsaw, Indiana to Margaret E. Hamman, she survives. His father was a Barber and times were tough in the early years for the family. His parents did the best they could trying to raise a young family in the depths of the depression as the world spiraled towards another World War.   He was a 1947 graduate of Etna Green High School. He was proud to have played baseball and basketball for the Etna Green Cubs. Rex was a spring maker for Midwest Spring of Mentone for 33 years.  He then founded his own business A.J. Coil of Tippecanoe. He was a longtime member of the First Baptist Church of Mentone.  In earlier years, he was a good mechanic and raced stock cars with engine his brother had shaved the heads on to get just a little more out of them. Rex was a sports fan and an avid muzzle loader enthusiast. He and his brother Harold shot Muzzle loading guns in matches all across the country from the midwest to the Rocky Mountains. Their competitors dreaded to see the Yazel boys pull in. There are many stories from these exploits of challenges accepted and matches won. He is survived by his wife Maggie Yazel of Tippecanoe; daughters Sherry and husband Stan Pequignot of Winona Lake, Kathy and husband Lloyd Morgan of Akron, Joanne and husband Darrell Dean of Warsaw, Rachel and husband Frank Banghart of Warsaw; sons Randy and wife Aimee Nellans of Rochester and Rusty and wife Kelly Nellans of Mentone; 21 Grandchildren; 44 Great Grandchildren; and 2 Great Great Grandchildren.   Rex was preceded in death by his parents, a son Max Yazel, brother Harold Yazel, and a sister-in-law Ellanora Yazel. The funeral service will take place at 10:30 am, Tuesday, July 13, 2021 at King Memorial Home 101 North Tucker Street Mentone, Indiana with Pastor Michael Wilhite and Pastor Tim Farley officiating. The interment will take place in the Mentone Cemetery, Mentone, Indiana. Visitation hours will be from 4 pm to 7 pm, Monday, July 12, 2021 at King Memorial Home, Mentone, Indiana. Donations can be made in his memory to the First Baptist Church of Mentone.

The family of Russell Rex "Arkie" Yazel created this Life Tributes page to make it easy to share your memories.

Send flowers to the Yazel family.