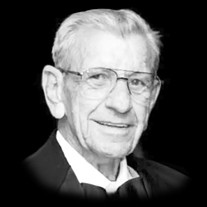 Ronald “Ron” Martin, 81, Savannah, Texas, and formerly a resident of Akron for 60 years, graduated to Heaven on Dec. 1, 2017. Born Sept. 28, 1936, in Akron to the late Lewis and Martha Ellen (Sands) Martin, he lived his childhood and the majority of his life in Fulton County. A devoted husband for 62 years, he was married to the late Dorothy J. (Koenig) Martin at Pleasant Hill United Methodist Church, Macy, on July 4, 1954. He was an avid car enthusiast, learning mechanics and working for the late George Stephen, and later opening his own Akron business, Ron’s Garage, in 1962. As a successful businessman for more than 45 years, he semi-retired to Texas, becoming a building associate for his son-in-law’s north Texas construction business, Rock Harbor, for 10 years before managing his own small lawn care company in South Texas, then again assisting his son-in-law until November 2017. A Midwest family man to the core, he loved and valued family and friends exceedingly. He enjoyed family outings, bowling, dancing, mentoring all ages under the hood of cars, volunteering for various Sunday school classes and projects, supporting his children and grandchildren’s activities, planting a church in the country of Mexico, attending Indianapolis 500 races with longtime friend Fred Brown of Rochester, and driving sports cars or anything with wheels! A major highlight of Ron and Dorothy’s union was a celebration of their 50th wedding anniversary, walking from Dallas to Akron, a total of 1,000 miles in 100 days. During this incredible trek across America’s heartland, they had the privilege of meeting many locals and writing the book “Challenging the Road Ahead” and sharing their story on Christian television and local telecasts. A member of UP Church, located in a Dallas suburb, he was loved by many and was known as a loving and giving servant of God. Much to his family’s heartache and loss, they are comforted to know his reward is great and his race is won. Left to cherish the memory of Ron are a son, Rick (Kathleen) Martin, Golden, Colo.; daughter Krista (Brian) Riner, Savannah, Texas; grandchildren Adam (Julie) Martin, Alaina (Justin) Ernest, Brant Riner, Emberli (David) Pridham, Savanna (Anthony) Dee, Caleb (Peyton) Riner, and Roc Riner; great-grandchildren Lela Martin, Cedella and Juniper Ernest and Brooke and Noah Pridham; sisters Karen (Eugene) Deeds and Susie (Virgil) Hudkins; and brothers Jim (Mary) Fisher and John (Jeanne) Fisher. He was preceded in death by his beloved wife, Dorothy; parents; brothers Ralph, Robert, Charles, LeRoy and Donald Martin; and sister Virginia Baker. A celebration of life for Ron will be Saturday, Dec. 30, at 10 a.m. at The Cross church, Rochester, with visitation one hour prior to the service. Burial will be at the Akron Cemetery. In lieu of flowers, contributions may be made to UP Church, 1524 Carriage Lane, Savannah, TX 76227.

The family of Ronald Martin created this Life Tributes page to make it easy to share your memories.

Send flowers to the Martin family.