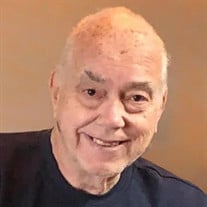 Robert “Bob” J. Janick, 83, of rural Silver Lake and formerly of Justice, Illinois passed at 9:15 am, Saturday, June 5, 2021 at his residence. Bob was born on April 12, 1938 in Chicago, Illinois to the late Joseph and Margaret (Petek) Janick. He was married April 28, 1962 in Chicago, Illinois to Joan Strepek, she survives. He was a graduate of Kelly High School of Chicago, Illinois in 1956. He retired as the Superintendent for the Chicago Sun Times after 30 years with the paper. Bob was a lifetime motorcycle enthusiast. He was a member of the Cycle Conservation Club of Michigan, the Retreads of Chicago, North America 40+ Touring Riders, United SideCar Association, and the Vintage Japanese Motorcycle Club of America. Bob rode, along with his wife, hundreds of thousands of miles and saw every state but Hawaii. He also was a member of the Moose Lodge of Rochester. He is survived by his wife Joan Janick of Silver Lake; sons Robert L. Janick of Chicago and Scott and wife Jessica Janick of Justice, Illinois; grandchildren Jonathan, Alyssa, Tori, and Darren; and a brother Joseph Janick of Phoenix, Arizona. Bob was preceded in death by his parents, a daughter Karin Petro, granddaughter Jacquie, a sister Margaret Emmett. Following his wishes no services will be held at his time. The arrangements have been entrusted to Hartzler Funeral Home 305 West Rochester Street Akron, Indiana. Donations can be made in Robert’s memory to the Cycle Conservation Club of Michigan 116 Wolcott St, Allegan, MI 49010.

The family of Robert J. Janick created this Life Tributes page to make it easy to share your memories.

Send flowers to the Janick family.