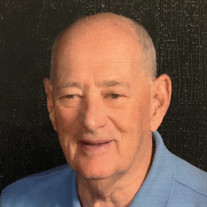 Robert R. Holloway, 84, of rural Mentone and North Port, Florida passed away at 12:30 pm, Saturday, March 20, 2021 at his residence in Florida. Bob was born on May 22, 1936 in Warsaw, Indiana to the late Clayton J. and Maxine (Scott) Holloway. He had been married to Dolores Mock. He then married on Jan. 1, 1984 in Burket, Indiana to Esther M. Leonard, who preceded him in death on Dec. 22, 2015. He was a graduate of Mentone High School in 1955. He served his country in the U.S. Army. While in the service he was stationed in Island/Greenland. Bob had worked for R.R. Donnelley & Sons of Warsaw for 42 years. Bob was an avid classic car enthusiast. He attended many car shows with his Ford Galaxies and 1940 Chevy. He restored several classic cars. He also enjoyed racing, driving late models and go carts. You could see him drive at Gas City and Kokomo in his driving days. He was a NASCAR fan, cheering on his driver's Bill Elliott and Chase Elliott. Bob was also a longtime member of the Cruisin’ Hoosiers Car Club, Rebel Rousers Car Club, and the Moose Lodge of Warsaw. Bob is survived by his companion Betty Chandler of North Port, Florida, daughters Vickie Bradley of Mentone and Sherri and husband Rick Nelson of Warsaw, a son Steve Holloway of Warsaw, grandchildren Jennifer, Brett, Tyler and Brynn, and great grandchildren Dylan, Dominic Reagan, Clayton, Linxi, Ava, and Alanna. He was preceded in death by his parents, wife Esther, a son Jeff Canary, a brother Max D. Holloway, and his Step Mother Marguerite Rayner. The funeral service will take place at 10:30 am, Monday, March 29, 2021 at King Memorial Home 101 North Tucker Street Mentone, Indiana with Pastor Rod Utter officiating. The interment will take place in the Mentone Cemetery, Mentone, Indiana with graveside military rite performed by the American Legion Post #49 Honor Guard of Warsaw. Visitation hours will be from 2 pm to 5 pm, Sunday, March 28, 2021 at King Memorial Home, Mentone, Indiana. Donations can be made in Bob’s memory to the donor’s choice of charity.

The family of Robert R. Holloway created this Life Tributes page to make it easy to share your memories.

Send flowers to the Holloway family.