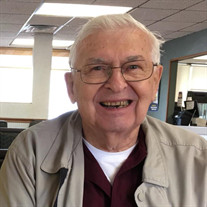 Richard C. Webb, 86, of Mentone, Indiana passed at 1:15 am, Saturday, June 26, 2021 at Paddock Springs of Warsaw, Indiana. Richard was born on Jan. 16, 1935 in Fulton, Indiana to the late Archie and Henrietta (VanDenBurg) Webb. He was married on April 20, 1956 in Kewanna, Indiana to Alice F. Stingley, she preceded him in death on Nov. 11, 2020. He was a graduate of Grass Creek High School Grass Creek, Indiana. He served his country in the U.S. Navy during the Korean War. He had been an electrician for many years in the area. Richard had been a long time member of the Mentone United Methodist Church. He had also been a member of the former Mentone American Legion and an active member of the former Mentone Masonic Lodge #576. He loved to read and served on the Board of the Bell Memorial Library. He and his wife enjoyed assisting families at Mary & Jerry’s Helping Hands. He attended many Indianapolis 500 Races. He was honored to be a part of a Veterans Honor Flight. He is survived by sons Jim and wife Melinda Webb of Claypool and Jeff and wife Kristi Webb of Lancaster of Lancaster, South Carolina, a grandson Zach Webb, and step grandchildren Aaron and wife Lexi Alfono and Amber Alfono. Richard was preceded in death by his parents, wife Alice Webb, a sister Susan Stough, and brothers Frank and Robert Webb. The funeral service will be held at 11:00 am, Tuesday, June 29, 2021 at King Memorial Home 101 North Tucker Street Mentone, Indiana with Pastor Jeff Herron officiating. The interment will take place in the Mentone Cemetery, Mentone, Indiana with graveside military rites performed by the Warsaw American Legion Post #49. Visitation hours will be from 10 am to 11 am, Tuesday, June 29, 2021 at King Memorial Home, Mentone, Indiana. In lieu of flowers donations can be made in Richard’s memory to the Mentone United Methodist Church or Bell Memorial Public Library 101 W Main St, Mentone, IN 46539.

Richard C. Webb, 86, of Mentone, Indiana passed at 1:15 am, Saturday, June 26, 2021 at Paddock Springs of Warsaw, Indiana. Richard was born on Jan. 16, 1935 in Fulton, Indiana to the late Archie and Henrietta (VanDenBurg) Webb. He was married... View Obituary & Service Information

The family of Richard C. Webb created this Life Tributes page to make it easy to share your memories.

Send flowers to the Webb family.