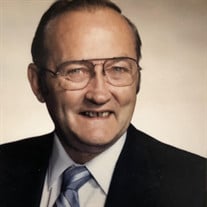 Richard Leroy Utter, 87, of rural Mentone, Indiana passed at 11:45 pm, Monday, May 10, 2021 at his residence.  Dick was born on April 1, 1934 in Fulton, Indiana to the late Wilbert R. and LaVera M. (Walters) Utter.  He first married on April 6, 1952 to Juanita J. Clemans. He then married on April 28, 1973 in Mentone to Lois A. Yacks, she preceded him in death on Dec. 5, 2006.  He was a 1952 graduate of Talma High School. He had been a farmer and also worked for R.R. Donnelley & Sons of Warsaw, Indiana in the boiler room for 35 years. After retiring he was a janitor for Tippecanoe Valley High School for 6 years.   Dick enjoyed working with wood and built many things.  He also was known to cut his own wood to use for his projects. He attended the Cornerstone Church of Mentone, where he had helped in the remodeling of the building.  He is survived by his daughters Laura and husband Kenneth Hawkins of Warsaw, Rita Jo Utter of Ft. Wayne, Shelly King of Burket, Kathy Blauser of Warsaw, Brenda Utter of Etna Green, and Tina and husband Jeff Becker of Culver; a son Rod and wife Donna Utter of Akron; step daughter Margaret and husband Mike Walton of Mentone; foster daughter Janet Elliott of Kentucky; 9 Grandchildren; 11 Great Grandchildren; sisters Sue Curtis of Warsaw and  Luanne and husband Jim May of Columbia City.  Dick was preceded in death by parents, wife, grandson Ryan Utter, brothers Ron and Jim Utter, and a step son Darwin Powell.  The family will hold a memorial service at 4:00 pm, Sunday, May 16, 2021 at the Cornerstone Church 101 N Franklin St, Mentone, IN 46539 with Pastor Rod Utter officiating.  Friends may gather for a memorial visitation on Sunday, May 16, 2021 from 3 pm to 4 pm at the Cornerstone Church.   Arrangements have been entrusted to King Memorial Home 101 North Tucker Street Mentone, Indiana.  Donations can be made to the Center for Hospice Care 112 South Center Street Plymouth, Indiana 46563.

The family of Richard Leroy Utter created this Life Tributes page to make it easy to share your memories.

Send flowers to the Utter family.