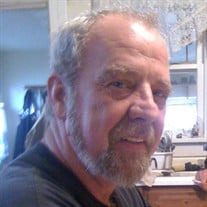 Richard M. Ritchie, 59, of Rochester, died Monday, March 2, 2015, at his residence. He was born Sept. 27, 1955, in Chicago, to Herschel and Beulah (Smith) Ritchie. He was married to Jean Dennis Johnson. Richard was a heavy machine operator... View Obituary & Service Information

The family of Richard M. Ritchie created this Life Tributes page to make it easy to share your memories.

Send flowers to the Ritchie family.