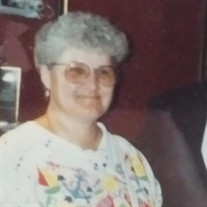 Reta Y. Bahney, 84, of rural Akron, Indiana passed at 6:06 am, Saturday, February 19, 2022 at her residence. Reta was born on June 3, 1937 in Altona, Michigan to the late Lonnie and Elizabeth (Stine) Hopkins. She married on June 3, 1962 in the Akron Church of God to Virgil U. “Butch” Bahney, who preceded her in death on June 12, 2009. She was a 1955 graduate of Akron High School. She then served her country in the U.S. Air Force from 1955 to 1957, where she was a secretary to high ranking officers. Reta had then worked for Pike Lumber, General Tire, Square D, as well as doing accounting work and being a homemaker. She loved to spend time with her grandkids and great grandkids. She could be found on many days watching game shows and cooking shows on television. She is survived by her son Paul M. Bahney and fiancé Patsy Waymire of Rochester; daughters Denise Messer of Warsaw and Lisa Bahney of Akron; grandchildren Ashley, Logan, Jerrica, Dustin, and Bailey; 7 Great Grandchildren; sisters Lorraine Thompson of LaFontaine and Eleanor Bailey of Warsaw; and a brother Dwayne Hopkins of Wabash. Reta was preceded in death by her parents, her husband Butch, and sisters Linda Kelly and Sandra Mitchell. A memorial service will take place at 1:00 pm, Saturday, March 19, 2022 at Hartzler Funeral Home 305 West Rochester Street Akron, Indiana with Pastor Wayne Balmer officiating. Following the service military rites will be performed by the Fulton County Honor Guard. A private interment took place in the Akron Cemetery, Akron, Indiana. Memorial visitation will be from 11 am to 1 pm, Saturday, March 19, 2022 at Hartzler Funeral Home 305 West Rochester Street Akron, Indiana. Memorial contributions can be made in her memory to Kindred Hospice or to the Fulton County Honor Guard.

The family of Reta Y. Bahney created this Life Tributes page to make it easy to share your memories.

Send flowers to the Bahney family.