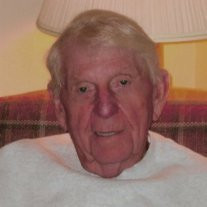 Ralph "Whitey" R. Wideman Jr. Nov. 24, 1928 - Dec. 25, 2013 Ralph "Whitey" R. Wideman Jr., 85, Warsaw, formerly of Mentone, died at 4:35 a.m. Wednesday, Dec. 25, 2013, at Miller'avs Merry Manor, Warsaw, where he had been for two weeks. Whitely was born Nov. 24, 1928, in Mentone, the son of Ralph and Alma Gail (Miller) Wideman. On April 23, 1949, in Mentone, he married Mary Ann Jacks. She preceded him in death on May 28, 1985. Whitey worked for Arnolt Corporation of Warsaw for more than 40 years as an engineer and he was a farmer. He was a member of the Masonic Lodge of Warsaw, the Scottish Rite of Fort Wayne and the Mizpah Shrine of Warsaw. He was an avid IU basketball fan and he also enjoyed fishing. Survivors include three daughters, Myra Barnett and husband Mike, Leesburg, Sheryl Poston and husband Dan, Leesburg, and Robin Adams and husband Ken, Warsaw; a son, James Wideman and wife Penny, Warsaw; five grandchildren; 10 great-grandchildren; and several nieces and nephews Whitey was preceded in death by his wife, Mary Ann Wideman; a grandson, Jason Rodgers; a granddaughter; and three sisters, Pauline Cochran, Marie Rathbun, and Maxine Horn. Funeral service is at 10:30 a.m. Saturday, Dec. 28, 2013, at King Memorial Home, 101 N. Tucker St, Mentone, with Pastor Woody Burchett officiating. Burial will be at the Mentone Cemetery. Visitation is from 4-7 p.m., Friday, Dec. 27, 2013, at King Memorial Home, Mentone. Memorial contributions may be made to Shriners Hospitals for Children. Share a memory or send an online condolence at www.hartzlerfuneralservices.com. Arrangements made by King Memorial Home, Mentone.

The family of Ralph R. 'Whitey' Wideman Jr. created this Life Tributes page to make it easy to share your memories.

Send flowers to the Wideman family.