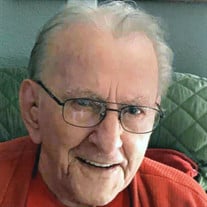 Paul Eugene “Gene” Strevy, 95, of North Manchester, Indiana and formerly of Akron passed at 11:45 am, Sunday, Sept. 20, 2020 at Peabody Retirement Community of North Manchester. Gene was born on Feb. 26, 1925 in Andrews, Indiana to the late Alvin and Hazel (Druley) Strevy. He was married to Bonnie (Flohr) Strevy until her passing on April 4, 1964. He then married on Oct. 15, 1965 to Janet Swihart Martin, she survives. Gene had been an egg buyer and was the Assistant Manager of Warner Corporation of North Manchester. He served his country in the U.S. Army during WWII as a Private First Class 328th Harbor Craft Company. He was a part of the Utah Beach invasion of German-occupied France in the Normandy landings on June 6, 1944. In years past he was a member of the Moose, VFW, and American Legion all of North Manchester. He enjoyed golfing, baseball, bowling, and loved to read. Gene was always an avid Cubs and Colts fan. Survivors include his wife, Janet Strevy, North Manchester; daughters, Janet and husband Tim Eaves, Ft. Worth, Texas and Diana Strevy, Mooresville, North Carolina; sons, Alfred Eugene and wife Allison Strevy, North Manchester and Alan and wife Sonia Strevy, Ft. Wayne; 10 Grandchildren; and 18 Great Grandchildren. He was preceded in death by his parents, his wife, Bonnie, 3 sisters, and 3 brothers. A graveside service will take place at 11:00 am, Thursday, Sept. 24, 2020 in the Akron Cemetery, Akron, Indiana with Pastor J.P. Freeman officiating. Graveside military rites will be performed by the American Legion Post 286 of North Manchester. The arrangements are entrusted to Hartzler Funeral Home 305 West Rochester Street Akron, Indiana. Donations can be made in Mr. Strevy’s memory to Wounded Warrior Project, P.O. Box 758516, Topeka, Kansas 66675-8516.

The family of Paul "Gene" Eugene Strevy created this Life Tributes page to make it easy to share your memories.

Send flowers to the Strevy family.