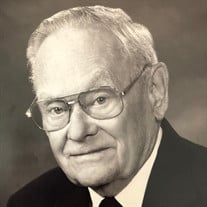 Dr. Orville L. McFadden, 94, of rural Claypool, Indiana passed at 8:00 am, Tuesday, March 26, 2019 at his residence. He was born on Oct. 25, 1924 in New Haven, Indiana to Russell and Evelyn (Pfeiffer) McFadden. He was married on Nov. 10, 1951 in Millville, Michigan to Vanoma I. “Judy” McFadden, who preceded on Sept. 28, 2016. He had been a doctor of Veterinary Medicine in the Mentone area for 25 years retiring in 1971. He then worked for 10 years as an Area Supervisor for the State of Indiana of Health for meat inspection. He also raised cattle and hogs for many years. Doc was a graduate of New Haven High School in 1943. He then served his country in the U.S. Navy from 1943 to 1946. He served his tour of duty as an engineering officer for a Pacific Destroyer Escort. After his military service he achieved his Doctorate at Michigan State University College of Veterinary Medicine. He served on many boards that included the Farmers State Bank Board for 46 years, the Tippecanoe Valley School Board, the Mentone (Mentzer) Park Board, Mentone Town Board, and the Mentone Co-Op. He was a member of the Mentone United Methodist Church for over 50 years, an over 50-year member of the Masonic Lodge #576 of Mentone, and the Scottish Rite and Mizpah Shrine both of Ft. Wayne. Doc was also a member of the former Mentone American Legion and the Warsaw American Legion and the Mentone Flying Club and was an avid flyer. He and his wife also enjoyed square dancing. Survivors and place of residence: Daughters – Deneice Childers – Akron, Ind. Karen and husband Roy Dishong – Huntington, Ind. Sons – James and wife Debra McFadden – Mentone, Ind. Roland and wife Pam McFadden – Claypool, Ind. Grandchildren – Rebekah, Megan, Jenna, Elizabeth, Nathan, and Devin 10 Great Grandchildren Sister – Lois Quill – Ft. Wayne, Ind. Preceded in Death By: Parents Wife – Judy McFadden Son – Dean McFadden (1983) Son-in-law – Keith Childers Brothers – Cletus and Virgil McFadden Time and Date of Services: 10:00 am, Monday, April 1, 2019 Place of Services: King Memorial Home 101 North Tucker Street Mentone, Indiana Minister: Pastor Jason Rice Place of Burial: A graveside service with graveside military rites will take place at 2:30 pm, Monday, April 1, 2019 in the IOOF Cemetery, 1109 Hartzell Rd. New Haven, Indiana Visitation Hours: 2 pm to 5 pm, Sunday, March 31, 2019 at King Memorial Home, Mentone, Indiana with a Masonic Service to take place at 5:00 pm. Memorial contributions can be made to the Mentone United Methodist Church.

The family of Dr. Orville L. McFadden created this Life Tributes page to make it easy to share your memories.

Send flowers to the McFadden family.