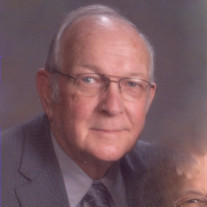 Norman L. Tinkey, 82, Rochester, passed away at 8:05 a.m. Friday, April 11, 2014, at Woodlawn Hospital after being in failing health for a period of time. On Dec. 9, 1931, Norman was born in Claypool to Clarence and Cleo A. (Jones) Tinkey. Norman married Rozella M. Holloway on Sept. 2, 1950, at the Akron Church of the Brethren and she survives. He was an independent insurance agent as wall as a real estate broker. Prior to that he worked a Sonoco Products, Akron. Norman graduated from Burket High School in 1949. He was a member of the Akron Church of the Brethren where he was deacon, trustee, and property in addition he was a Sunday school teacher. He was past member of the Akron Lions Club and the Akron Chamber of Commerce. He enjoyed fishing, part-time farming, mushroom hunting, and spending time with all his grandchildren and great-grandchildren. Survivors include his wife, Rozella M. Tinkey, Akron; two daughters, Lana and husband Fred Bowser, Akron, and Tana M. Tinkey, Akron; a son, Bryon and wife Christine, Akron; four grandchildren, Brent and Aryn Bowser, Alyssa and Travis Ramsey, LeErick Bowser and Jonathan L. Tinkey; five great-grandchildren, Dixie, Benjamin, Maison, Ella and Abbygaile; two sisters, Peggy and husband Garwin Eaton, Mentone, and Shirley and husband Larry Polk, Leesburg; and a brother, Merl and wife Linda Tinkey, Akron. He was preceded in death by a brother, Richard John Tinkey, and a great-grandchild, Prim Ramsey. Funeral service is 11 a.m. Wednesday, April 16, 2014, at Akron Church of the Brethren, 212 S. Maple St., Akron, with Pastor David Hendry officiating. Burial is in the Akron Cemetery, Akron. Visitation is 2-4 p.m. and 6-8 p.m. Tuesday, April 15, 2014, at Hartzler Funeral Home, 305 W. Rochester St., Akron. Memorial contributions may be made to the Akron Church of the Brethren. Share a memory or send online condolences at www.hartzlerfuneralservices.com.

The family of Norman L. Tinkey created this Life Tributes page to make it easy to share your memories.

Send flowers to the Tinkey family.