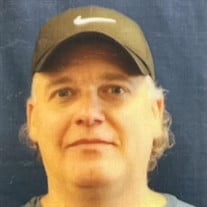 Neal Patrick Smythe, 49, of rural Claypool, Indiana passed unexpectedly Sunday, April 17, 2022 at his sister’s residence.   Neal was born on Sept. 6, 1972 in Warsaw, Indiana to David and Rainelle (Davis) Smythe. Neal married on Feb. 14, 2010 to Elizabeth Francis in Gatlinburg, Tennessee, she survives. He was a graduate of Tippecanoe Valley High School in 1991. He then graduated from Ball State University with a Bachelor’s Degree in Criminal Justice and Teaching. During high school and college he worked part-time for Ace Hardware of Mentone and Da-lite Screen and Union Tool of Warsaw. After college he began working for R.R. Donnelley & Sons. Currently, he has been with the company for over 25 years, and most recently serving as a cylinder maker. He loved all sports. He enjoyed golfing and all types of racing. Neal visited every NASCAR track, with the exception of Las Vegas. Since his childhood he was a fan of North Carolina Tar Heels basketball. He also became fond of the Miami Dolphins and had a Dan Marino autograph he cherished. He maintained a lot of lifelong friendships. He was a loving man and cared for his family.  He is survived by his wife Liz Smythe of Mentone; daughters Kiera of Tippecanoe and Grace of Mentone, mother Rainelle and husband Terry Dowell of Mentone; father David and wife Sandra Smythe of Tippecanoe; brother Skip and wife Kelly Smythe of Warsaw; sister Keri Glennie of Claypool; niece and nephews Paige, Mason, Tanner, and Chase; and paternal grandmother Gertrude Smythe.   Neal was preceded in death by his special step father Dennis R. Overmeyer, maternal grandparents Richard “Dutch” and E. Joan Davis, and paternal grandfather Harrold Smythe.    A graveside service will take place at 12:00 noon, Thursday, April 21, 2022 in the Palestine Cemetery, Palestine, Indiana with Pastor Butch Troke officiating. A celebration of his life will also take place at a later date.   The arrangements have been entrusted to King Memorial Home 101 North Tucker Street Mentone, Indiana. Memorial contributions can be made in his memory to the Beaver Dam United Methodist Church/Wheels on Fire.

The family of Neal Patrick Smythe created this Life Tributes page to make it easy to share your memories.

Send flowers to the Smythe family.