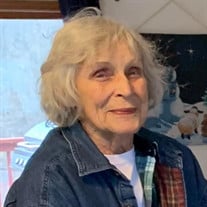 Nancy Jean Shafer Dotson, 85, passed away the morning of April 13, 2022, at Woodlawn Hospital, surrounded by a mob of family members, a few friends, and numerous coffee cups—she was loving it! Nancy was born at home in Miami County on August 25, 1936, the first of Evelyn and Chester Shafer’s six children. She went to school at Gilead from first grade through twelfth, graduating along with eight of her best forever friends in 1954. She worked at Senger Dry Goods her senior year, an experience she never forgot. She spent a year at Ball State, which gave her a never-ending respect and admiration for education and for escaping one’s younger siblings. She worked a variety of jobs, always taking friendships and stories with her when she left each one due to family needs or life changes. One of her favorite jobs was as a waitress at the Steer-In restaurant near Silver Lake, when her boss stood in the doorway to the kitchen and threatened to fire her if she broke “one more cup.” As he turned to leave, she dropped a cup. He kept on walking. She married Lester Dotson, Jr. (Junior) on December 20, 1955. They shared many years, an interruption, and much love, as well as three daughters, four grandchildren, and five great grandchildren. Junior preceded Nancy in death on January 13, 2013. Almost as much as her family, Nancy loved traveling. She went to Ireland with friends twice—once as the designated driver; her friends all survived. She made her home in Oregon, Montana, Pennsylvania, and Kentucky at different points in her life and even though they weren’t all happy times, she took good memories from each place. She was so many things to so many people. She was the bread-baker, pie-maker, and cook. Her friend Julie taught her to decorate cakes. If you won her disapproval, she’d very likely refer to you as a heifer. Her grandsons learned to identify the “death look.” Her favorite things to be were Granny, Mom, sister, aunt, and friend, in no particular order—she had enough love to go around. The earth is poorer now, our hearts emptier, without Nancy sitting at her kitchen table ready for coffee and conversation, and we know the ones who preceded her—her parents and husband, her sister Christine, her brothers Tom and Dan, and some beloved friends and pets—were waiting on the other side. They are catching up on their stories. Some of them may even be true! Left to mourn and be grateful for her life are her daughters Sharon (Ronnie) Conley, Karen Kyler, and Wendy (Tom) Ellet; two grandsons, Ryan (Melissa) Dotson and Brook (Melissa Johnson) Stevens; two granddaughters, Caitlin and Renessa Ellet; five great-grandchildren, Brianna, Miranda, Kaydence, Lexi, and Colton; one brother, Joe (Sadie) Shafer; one sister, Liz (Duane) Flaherty; special family Ida Walter and Kerry Keaffaber; and more nieces, nephews, and kids-of-the-heart than could be named here. Memorial visitation will be held from 1 pm to 3 pm, Saturday, April 23, 2022 at Hartzler Funeral Home 305 West Rochester Street Akron, Indiana. Memorial contributions can be made in her memory to the donor’s choice of charity.

Nancy Jean Shafer Dotson, 85, passed away the morning of April 13, 2022, at Woodlawn Hospital, surrounded by a mob of family members, a few friends, and numerous coffee cups&#8212;she was loving it! Nancy was born at home in Miami County on... View Obituary & Service Information

The family of Nancy Jean Dotson created this Life Tributes page to make it easy to share your memories.

Nancy Jean Shafer Dotson, 85, passed away the morning of April...

Send flowers to the Dotson family.