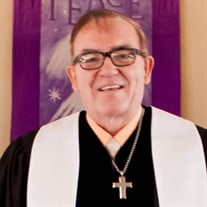 Michael E. McFarland June 30, 1951 – May 23, 2015 Rev. Michael E. McFarland, 63, of 1230 Madison St., Rochester, passed away and his faith became sight with his loving family at his side at 8:05 p.m. Saturday, May 23, 2015, at Woodlawn Hospital, Rochester, after being in failing health since November. He was born June 30, 1951, in Rochester, to Eugene and Virginia (Swango) McFarland. He was married Sept. 2, 1976, in Rochester, to Susan J. Craig, and she survives. He was the Athens United Methodist Church minister for the last four years. Michael worked for Woodlawn Hospital in the emergency room and intensive care unit as well as for Kosciusko Community Hospital and Medstat, Warsaw. He also was a director of nursing at Peabody Retirement, North Manchester, worked in the EMS Department at Woodlawn and at the Bremen Kindred Nursing Home. Michael received his associate degree in general studies in 1990. He then attained his associate degree in nursing from Indiana University in 1991 and his bachelor's degree in 1995. He took the community parish nurse course in Ohio to further his ministry. He was honored as the Outstanding Alumni in 1995 and received the Carle Foundation Award in 2002. He attended the Ozark Bible College, Neosho, Mo. He received his Ordination Certificate on July 30, 2007, from the Northwest Indiana District. He served as pastor of the Logansport and Kingsford Heights Assembly of God Church. He conducted revival meetings in Logansport, Mooresville and Athens. Michael also was the associate pastor at the Rochester Nazarene Church as well as being involved in children’s ministry. He was looking forward to having his next revival Stepping Back in Time tent meeting June 11-14. In previous years, he served as a city councilman in Rochester. He was a man of God that never knew a stranger and always put others before himself. He enjoyed family time, reading and eating at restaurants. Survivors include his wife, Sue McFarland, Rochester; daughters Melissa and husband Brian Weitzel and Rebecca and husband Brian Sweany, all of Rochester; sons Michael and wife Tamara McFarland, Rochester, and Matthew and wife Samantha McFarland, Lafayette; father Eugene McFarland, Rochester; mother-in-law Lorna Craig, Rochester; aunt Evelyn McFarland, Rochester; nine grandchildren, Clifford Vanata, Bronson and wife Dasha Vanata, Margaret and husband Andrew Rock, Madison Sweany and fiance Kyle Nelson, Joselin Sweany, Bryce Weitzel, Reese Weitzel, Nathinel Beck and Emma Beck; great-grandchildren Willow and Weston Vanata; brother Tim and wife Sue McFarland, Rochester; brother-in-law Jim and wife Judy Brazo, Warsaw; nieces and nephews Julia Gibbons, Laura Smiley, Tim Shepherd, Kim Hunt and Heather Cox; and dog Mollie. He was preceded in death by his mother, Virginia McFarland, mother-in-law Jo and husband Guy Stayton, father-in-law Raymond Craig and brother-in-law Delmor Shepherd His funeral service is 10:30 a.m. Thursday, May 28, 2015, at the Church of the Nazarene, 1987 Southway 31, Rochester, IN 46975. Rev. Don Meyer and Lay Servant Michael Walters will officiate. Visitation is 2-8 p.m. Wednesday, May 27, 2015, at the Athens United Methodist Church, 230 S. 650 East, Athens. Burial in the Rochester IOOF Cemetery. Memorial contributions may be made to Athens United Methodist Church teen ministry or Gideon’s International or Fulton County Animal Shelter.

The family of Rev. Michael E. McFarland created this Life Tributes page to make it easy to share your memories.

Send flowers to the McFarland family.