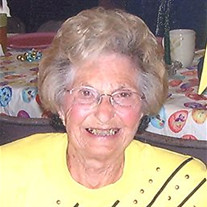 Mary A. Shirey, 96, Mentone, passed away 2:45 a.m. Friday, June 27, 2014, at Mason Health Care, Warsaw. Born on Nov. 6, 1917, in Mentone, she was the daughter of Chauncey and Golda (Ringle) Mollenhour. On May 3, 1941, in Mentone, she married Allen Guido "Deed" Shirey. She was a 1935 Mentone High School graduate. Mary was homemaker. Mary was a member of the Mentone United Methodist Church, the Order of the Eastern Star where she was past matron, the American Legion Auxiliary, the Scrambled Egg Band and the Dancing Grannys and Grandpa. She and her husband enjoyed square dancing and going out to eat, as well as playing cards. Survivors include a daughter, Suzy and husband John Klinefelter, Etna Green; a son, Steve and wife Linda Shirey, Bourbon; four grandchildren, Ryan Shirey, Brandon Shirey, Jamie Costilow and Stefanie Sauer; and four great-grandchildren. She was preceded in death by her husband, Allen Guido "Deed" Shirey on Sept. 20, 1994, two sisters, Eileen Koenig and Lola Bobbi Wallace, and a great-grandson. Funeral service is 10:30 a.m. Tuesday, July 1, 2014, at King Memorial Home, 101 N. Tucker St., Mentone, with Rev. Amber Karkosky-Litten officiating. Visitation is 5-8 p.m. today, June 30, 2014, at the funeral home. Memorial contributions may be made to Mollenhour Conservation Club, the Mentone EMS or the Mentone Fire Department.

The family of Mary A. Shirey created this Life Tributes page to make it easy to share your memories.

Send flowers to the Shirey family.