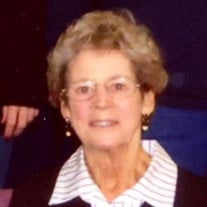 Marilyn R. Adams, 80, of Akron, passed away at 5:25 a.m. Wednesday, July 29, 2015, at the Memorial Hospital of South Bend. She was born on Nov. 21, 1934, in Milford, to Fred D. and Doris M. (Jennings) Haney. On Oct. 29, 1955, she was married to Raymond Adams at her parents home in Akron, and he survives. Marilyn was a 1952 graduate of Beaver Dam High School. She then graduated from Ball State University after completing the university’s 3-year program. In addition, she received a bachelor’s degree from Grace College and a bachelor’s degree from Purdue University. Marilyn retired from Woodlawn Hospital after 30 years of being a registered nurse. She had also been the director of nurses. She was a member of the Beaver Dam United Methodist Church and attended church there for 70 years. She enjoyed painting, traveling and watching the Cubs with her husband. She was known for being a community-minded person. Survivors include her husband, Raymond Adams, Akron; daughter Beth Ann Adams Cooper, Mentone; sons Phil and wife Shirley Adams, Warsaw, and Kent and wife Lisa Adams, Akron; brother Leslie “Buggs” and wife Laura Haney, Goshen; six grandchildren; three stepgrandchildren; six great-grandchildren; and six stepgreat-grandchildren. She was preceded in death by her parents and her brothers, Fred Jr., Maurice “Mort” and David Haney. Her funeral service is to be at 10:30 a.m. Saturday, Aug. 1, 2015, at Beaver Dam United Methodist Church, 9798 W. 1000 South, Akron, IN 46910, with Pastor Butch Troke officiating. Visitation is 2-7 p.m. Friday, July 31, 2015, at the Beaver Dam United Methodist Church. Burial is to be in the Akron Cemetery. Memorial contributions may be made to the Beaver Dam United Methodist Church.

The family of Marilyn R. Adams created this Life Tributes page to make it easy to share your memories.

Send flowers to the Adams family.