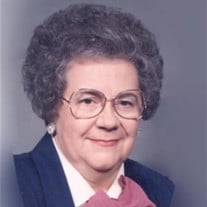 Marcella J. Meredith Nov. 25, 1930 – May 25, 2015 Marcella J. Meredith, 84, Burket, passed away at 2:20 a.m. Monday, May 25, 2015, at Millers Merry Manor, Warsaw. She was born Nov. 25, 1930, in Kosciusko County, to Elmer and Blanche (Miller) Dickey. On Nov. 4, 1950, in Akron, Marcella was married to Vernon C. “Mumps” Meredith, who preceded her in death on Dec. 17, 2008. Marcella was a bookkeeper and also a homemaker. She was a graduate of Beaver Dam High School. She attended the Burket United Methodist Church and the Riverview Community Church. She was a member of the Kosciusko County Home Economics Club. She was a very active in the Democratic Party in Kosciusko County. In their retirement years, she and her husband operated an antique business. She was a loving mother and grandmother. Survivors include her daughter, Melinda and husband Jim Webb, Claypool; son Marlin and wife Londa Meredith, Cicero; four grandchildren, Natasha, Cameron, Colin and Veronica; and a great-grandchild, Rylee. She was preceded in death by her parents, Elmer and Blanche Dickey; husband Vernon “Mumps” Meredith, infant son James D. Meredith and sister Carol Ann Shewman on May 17, 2015. Her funeral service is 10:30 a.m. Friday, May 29, 2015, at King Memorial Home, 101 N. Tucker St., Mentone, with Rev. Charles Gast officiating. Visitation is 5-7:30 p.m. Thursday, May 28, 2015, at King Memorial Home, Mentone. Burial will be in Nichols Cemetery, Akron. In lieu of flowers, memorial contributions can be made to Harbor Light Hospice, 800 Roosevelt Road Building C, Suite 206, Glen Ellyn IL 60137.

The family of Marcella J. Meredith created this Life Tributes page to make it easy to share your memories.

Send flowers to the Meredith family.