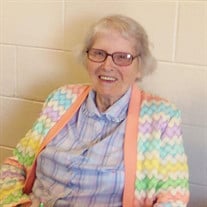 M. Lucile Doering, 96, of Akron, Indiana passed at 4:40 am, Monday, December 27, 2021 at Lutheran Hospital of Ft. Wayne, Indiana. Lucile was born on June 24, 1925 in Gilead, Indiana to the late Ernest H. and Alice Lavon (Sanderson) Bodkin. She married on Aug. 21, 1949, where they were the first marriage in Olive Branch Church of God to Raymond J. Doering, he survives. She had been a lifelong area resident of the Akron and Gilead areas. Lucile was a 1943 graduate of Gilead High School where she was salutatorian. She attended Marion College of Marion, Indiana. She was the co-owner, manager, and bookkeeper for Doering TV and Appliance of Akron and Rochester for 60 plus years. She then started Lucile’s Christian Book Store as well as working for Wen’s of Akron for a short time. Lucile then became a librarian for the Akron Carnegie Library, retiring after over 10 years. Lucile worshiped at Olive Branch Church of God until 1949. She then attended the Akron Church of God for the rest of her life. She was actively involved with the WCTU, Women’s Club, Women’s Missionary Society, and the Service Guild. Lucile loved hosting. She hosted friends and family as well as other groups in which she was involved. Music was important to her. Lucile led the music at a revival as a young woman. She had been the choir director and sang in the choir for many years. She always looked forward to teaching children and young adults at church. Most recently Lucile spent four years as a resident of Peabody Retirement Community and the Akron Garden Apartments. She is survived by her husband Ray of Akron; son Arnold Doering; daughters Connie and husband Mark Anderson and Patricia and husband Dave Woodward; 6 Grandchildren; and 8 Great Grandchildren. Lucile was preceded in death by her parents and sisters Helen Kissinger and Lillian Kamp. The funeral service will be held 12:00 noon, Monday, Jan. 3, 2022 at the Akron Church of God 301 S West St, Akron, Indiana with Pastor Kathy Nelson officiating. The interment will take place at 2:30 pm, Monday, Jan. 3, 2022 in the Laketon Cemetery, Ijamsville, Indiana. Visitation hours will be from 10 am to 12 noon, Monday, Jan. 3, 2022 at the Akron Church of God 301 S West St, Akron, Indiana. Memorial contributions can be made in her memory to the Akron Church of God.

The family of M. Lucile Doering created this Life Tributes page to make it easy to share your memories.

Send flowers to the Doering family.