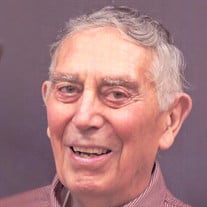 Lee E. Norris, 89, of rural Mentone, Indiana passed at 4:12 am, Monday, May 20, 2019 at his residence. He was born on Nov. 2, 1929 in Mentone, Indiana to Samuel N. and Dora F. (Boyer) Norris. He married on March 6, 1955 in Mentone, Indiana to Norene J. Bibler, she survives. Lee was a farmer and a businessman. In 1965 he started his own business, Lee E. Norris Construction and Grain Company Inc., which specialized in designing and selling industrial and agricultural dryers. Through the years that business would become Norris Thermal Technologies Inc. of Tippecanoe where 4 generation of his family have worked. He graduated from Beaver Dam High School in 1947. He served his country in the U.S. Army during the Korean War in artillery guidance. He was very active in the Mentone First Baptist Church. He served the church as Sunday School Superintendent, Trustee, Deacon, a teacher, and a youth leader. He also served the community on the Tippecanoe Valley School Board from 1978 to 1982. Lee was honored as a Distinguished Alumni of the Tippecanoe Valley School Corporation in 2016. He began riding motorcycles at the age of 66 and was a lifetime member of the Christian Motorcyclists Association and had been a member for 21 years. Additionally he was a lifetime member of the National Chapter and the former Wabash Chapter of the Harley Davidson Owners Group. He traveled to every state on his motorcycles. He and his wife celebrated 64 years of marriage on March 3 with 51 family members in attendance. Survivors and place of residence: Wife – Norene Norris – Mentone, Ind. Daughters – Connie S. Hunsberger (Mick Bowers)– Mentone, Ind. Cynthia Jo Miller – Claypool, Ind. Angela Lea Butler (Jeff Mesaros)– Syracuse, Ind. Sons – Daniel and wife Dawn Norris – Mentone, Ind. Aaron and wife Nicole Norris – Mentone, Ind. 14 Grandchildren 13 Great Grandchildren Preceded in Death By: Parents – Samuel and Dora Norris Sister – Lillie Rookstool Brother – Robert D. Norris Son-in-law – Brooks Butler Time and Date of Services: 2:00 pm, Friday, May 24, 2019 Place of Services: First Baptist Church 206 S. Oak Street Mentone, Indiana Minister: Rev. Michael Wilhite and Rev. George Shoemaker Place of Burial: Mentone Cemetery, Mentone, Indiana with graveside military rites being performed by the Warsaw American Legion. Visitation Hours: 3 pm to 7 pm, Thursday, May 23, 2019 at the Mentone First Baptist Church Donations can be made in Lee's memory to Christian Motorcyclists Association or the Mentone First Baptist Church.

The family of Lee E. Norris created this Life Tributes page to make it easy to share your memories.

Send flowers to the Norris family.