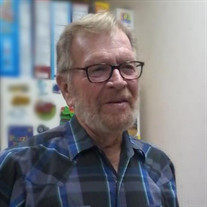 Kenneth Leroy Murphy, 78, of rural Silver Lake, Indiana passed unexpectedly at 6:58 pm, Friday, Feb. 11, 2022 at his residence. Ken was born on Jan. 13, 1944 in Logansport, Indiana to the late Oren and Mildred (Fincher) Murphy. He had previously been married to Rebecca Schooley Murphy. He then married on July 4, 1986 at their home to Linda Baker Gothan, she survives. He was a 1962 graduate of Silver Lake High School. After high school he worked for the State of Indiana doing surveying work. He then served his country in the U.S. Navy on the USS Porterfield as an Electrical Repairman during his 3 tours of Vietnam. Ken then became an instructor at Tippecanoe Valley High School for 31 years, retiring in 2008. As the Building Trades teacher, he educated many young adults. As a part of his program many homes were constructed for area families. Ken enjoyed woodworking, hunting, and raising many animals, which included raccoons, a coyote, deer, and birds. Over the years his giving heart led him to Camp C.O. Mollenhour, where he was longtime president. He also drove the transportation for the Special Olympics. Ken was a member of the Indiana Hunter Education Association where he taught hunter education classes. He was also very close to the 1961 Class of Silver Lake High School and regularly attended their luncheons. He attended Akron Church of God for many years. In earlier years he served as a youth leader at the Mentone United Methodist Church. Ken’s life was not just his kids and grandkids, but all children. He is survived by his wife Linda Murphy of Silver Lake; children Stephanie and husband Troy Shull of Mentone, Mike and wife Amy Murphy of Akron, April and husband Blake Myers of Akron, Aaron and wife Sabrina Gothan of Mentone, and Kayla Murphy of Rochester; 13 Grandchildren; sister Marjorie Murphy of Florida; brother Philip and wife Mary Margaret Murphy of Indianapolis; as well as numerous Builders Trades Students. Ken was preceded in death by his parents and a brother Clarence Murphy. The funeral service will be held at 10:30 am, Thursday, Feb. 17, 2022 at Hartzler Funeral Home Akron, Indiana with Pastor Kathy Nelson and Pastor Mandy Nellans. The interment will take place in the Harrison Center Cemetery, Etna Green, Indiana with graveside military rites performed by Warsaw American Legion Post #49 Honor Guard. Visitation hours will be held from 3 pm to 7 pm, Wednesday, Feb. 16, 2022 at Hartzler Funeral Home 305 West Rochester Street Akron, Indiana. Memorial contributions can be made in Ken’s memory to Camp C.O. Mollenhour 10265 S. 600 W. Silver Lake, IN 46982 or at https://comollenhourcamp.org/donate/

Kenneth Leroy Murphy, 78, of rural Silver Lake, Indiana passed unexpectedly at 6:58 pm, Friday, Feb. 11, 2022 at his residence. Ken was born on Jan. 13, 1944 in Logansport, Indiana to the late Oren and Mildred (Fincher) Murphy. He had previously... View Obituary & Service Information

The family of Kenneth Leroy Murphy created this Life Tributes page to make it easy to share your memories.

Send flowers to the Murphy family.