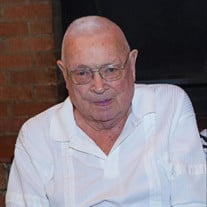 Keith H. Julian, 84, of Akron, Indiana and formerly of Clymers, Indiana passed with family by his side at 1:40 am, Tuesday, June 2, 2020 at his residence after being in failing health for over 3 years taking dialysis. Keith was born on June 18, 1935 in Onward, Indiana to the late Harley and Mary (Landis) Julian. He married on Aug. 25, 1957 in the Clymers United Methodist Church to Karen Sue Johnson, she survives. He was a graduate of Onward High School in 1953. After graduating, he lived in Kalamazoo for 3 years where he worked in manufacturing. Returning to the Onward area he met his soon to be wife Sue. He then began working for Kains Motor Service where he worked for 26 and a half years when they closed. He then became a security guard for Bunge Corporation in Clymers. He also worked for many years maintaining the parks for the Logansport Parks Department until retirement. In 2011 he moved to Akron, Indiana to be closer to some family. Keith enjoyed gardening and kept a large garden for many years. He was an avid television watcher and enjoyed westerns and all sports. He was a regular scratcher of lottery tickets and enjoyed his trips to Branson, Missouri. Survivors and place of residence: Wife – Sue Julian – Akron, Ind. Daughters – Deb and husband Mark Hartzler – Akron, Ind. Diana and husband Tom Smith – Lafayette, Ind. Sons – Mike and wife Nanette Julian – West Lafayette, Ind. Scott and wife Deb Julian – Logansport, Ind. Gary and wife Roberta Julian 12 Grandchildren and several Great Grandchildren Sister – Renee Julian – Clymers, Ind. Preceded in Death By: Parents Daughter – Theresa Julian Sisters - Eloise Tribbett and Donna Bernhardt Brothers - Gene, Dale, Dick, Fred and Clarence Julian Following all county, state, and federal guidelines for social distancing, the funeral service will take place at 12:00 noon, Friday, June 5, 2020 at Hartzler Funeral Home 305 West Rochester Street Akron, Indiana with Pastor Kathy Nelson officiating. The interment will take place following the service in the Ever Rest Memorial Park, Logansport, Indiana. Visitation hours will be from 10:00 am to 12:00 noon, Friday, June 5, 2020 at Hartzler Funeral Home, Akron, Indiana. Donations can be made in Keith’s memory to the American Heart Association 3816 Paysphere Circle Chicago, IL 60674 in memory of Theresa.

Keith H. Julian, 84, of Akron, Indiana and formerly of Clymers, Indiana passed with family by his side at 1:40 am, Tuesday, June 2, 2020 at his residence after being in failing health for over 3 years taking dialysis. Keith was born on June... View Obituary & Service Information

The family of Keith H. Julian created this Life Tributes page to make it easy to share your memories.

Send flowers to the Julian family.