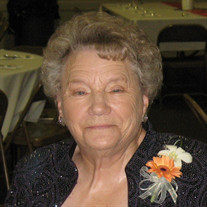 Kathryn I. Hartzler, 82, of Akron, Indiana unexpectedly passed peacefully at 8:40 am, Monday, July 13, 2015 at her residence. She was born April 27, 1933 in Marshall County, Indiana to Harold E. and Carrie Irene (McGriff) Walters. She was married June 17, 1951 in the Athens EUB Church to Stephen L. Hartzler he survives. She raised her family while managing and working in the home and on the farm. After her family was raised, she managed the Fulton County License Branch and was a greeter at her son’s funeral home. She moved from the Richland Center community to the Akron area while in grade school. She graduated in 1951 from Akron High School where she was a class officer and a HS cheerleader. She married her sweetheart right after high school, a union lasting 64 years. She enjoyed raising Hereford cattle with her husband. Having been a 10-year 4-H member she was a driving force to her children to follow and do the same. She started her political career as the Vice Precinct Committeeman in Fulton County. Kathryn always worked hard to get many good candidates elected, but never ran for an office herself. She was known in the county as well as the state for her Republican Politics serving as Vice Chairman and County Chairman for many years as well as Secretary of the Fifth District. Although she had lost most of her sight she always stayed in the political loop. She was awarded two Sagamores of the Wabash and a Distinguished Hoosier by three different Governors. She and her husband have held season tickets at Tippecanoe Valley High School for the boy’s basketball games since the schools inception as well as having season tickets for the Notre Dame Women’s Basketball for many years. Survivors and place of residence: Husband – Steve Hartzler – Akron, Ind. Daughters – Stephenia Barkman – Rochester, Ind. Melinda and husband Pete Pratt – Rochester, Ind. Son – Mark and wife Deb Hartzler – Akron, Ind. Grandchildren – Melea Powell-Hoffer, Stephen Heinzmann, Stacey McGriff, Blaine Hartzler, and Ashley Heinzmann Step Grandchildren – Stacy Barkman, Scott Barkman, Tara Wolfe, and Tabitha Floor 19 Great Grandchildren Sister - Jean Ann Deaton – Bourbon, Ind. Brother – Lloyd and wife Linda Walters – Rochester, Ind. Preceded in Death By: Parents - Harold E. and Carrie Irene Walters Infant Brother – Richard Walters Brother – Herschel Walters Son-in-law – Jim Barkman Time and Date of Services: 10:30 am, Friday, July 17, 2015 Place of Services: Hartzler Funeral Home 305 W. Rochester Street Akron, Indiana Minister: Pastor Phil Pratt Place of Burial: Akron Cemetery, Akron, Indiana Visitation Hours: 2 pm to 8 pm, Thursday, July 16, 2015 at Hartzler Funeral Home Akron, Indiana Memorial Contributions to: Stephen and Kathryn Hartzler Scholarship entrusted at the Northern Indiana Community Foundation

Kathryn I. Hartzler, 82, of Akron, Indiana unexpectedly passed peacefully at 8:40 am, Monday, July 13, 2015 at her residence. She was born April 27, 1933 in Marshall County, Indiana to Harold E. and Carrie Irene (McGriff) Walters. She was... View Obituary & Service Information

The family of Kathryn I. Hartzler created this Life Tributes page to make it easy to share your memories.