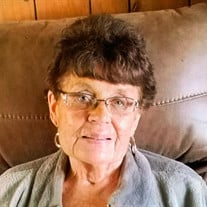 Judith Ann Rickel, 84, of rural Mentone, Indiana received her new life and body in heaven at 9:37 pm, Friday, March 18, 2022 at Paddock Springs of Warsaw, Indiana.   Judy was born on Feb. 4, 1938 in Allen County, Indiana to the late William and Esther (Deatsman) Rodocker. She married on Feb. 24, 1955 in Etna Green, Indiana to Francis Dwight Rickel, he survives.   She was a 1956 graduate of Atwood High School and was honored as the Queen of the Kosciusko County Fair. Judy then became a loving housewife and homemaker. She had also worked for Zimmer Orthopedics of Warsaw for a few years.  She was a member of the Burket United Methodist Church and formerly a member of the Order of the Eastern Stars. Judy and Francis were also members of the Christian Motorcycle Association. They rode their motorcycle from east to west, seeing most of the United States. She enjoyed wintering with her husband in Texas as well as fishing, hunting, archery, and flying planes.   She is survived by her husband Francis Rickel of Mentone; children Francis “Rick” Rickel Jr. and wife Evelyn of Mentone, Tony and wife Janice Rickel of Pleasant Hill, Missouri, and Patsy and husband Gary Bray of Milford; 13 grandchildren; 20 great grandchildren; and a brother Terry and wife Barbara Rodocker of Arkansas.   Judith was preceded in death by her parents, step father Vernon Patrick Kinney, daughter Cynthia S. Nellans, and granddaughter-in-law Reghan L. Nellans.   The funeral service will be held at 1:00 pm, Friday, March 25, 2022 at King Memorial Home, Mentone, Indiana. A live stream of the service will be made available on the Hartzler Funeral Services Facebook page at: https://fb.watch/bZUabZqz8G/   The interment will take place following the service in the Palestine Cemetery, Palestine, Indiana.   Visitation hours will be from 4 pm to 7 pm, Thursday, March 24, 2022 at King Memorial Home 101 North Tucker Street Mentone, Indiana. Memorial contributions can be made in her memory to Christian Motorcycle Association P.O. Box 9 Hatfield AK, 71945.

The funeral for Mrs. Rickel is available at: https://fb.watch/bZUabZqz8G/

Send flowers to the Rickel family.