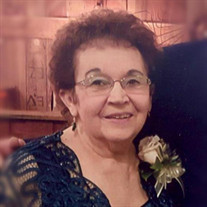 Judith M. “Judy” DeVries, 78, of Nyona Lake, Indiana passed at 6:08 am, Monday, October 19, 2020 at her residence. Judy was born on Aug. 7, 1942 in Miami County, Indiana to the late David Ralph and Arvilla I. (Wissinger) Eiler. Judy was known for her tireless work ethic. She currently served Trinity United Methodist Church as secretary and organist. She was always a friendly face at Walgreen’s and Helt Realty both of Rochester. As a part of Judy’s ministry, she played the organ for decades at numerous funerals. Judy served her community for 8 years on the Fulton County Council. In years past she had also worked for Deamer Abstract, the Fulton County Clerk’s Office, Peru Production Credit, Richard Kehoe Law Office, Susan Brown Law Office, and Sears. She was a 1960 graduate of Lagro High School. Judy was an active member of the Fulton County Republican Women’s Club and the Tri Kappa Sorority. She was a big fan of gospel singing groups and her favorite was Triumphant. She always enjoyed watching NASCAR. She is survived by her sons, Jeffery Roser of N. Manchester, Michael and wife Tammy Roser of Lebanon, Missouri, and Eric and wife Jody Roser of Roann; a daughter, Janie and husband David Williams of Greenville, South Carolina; grandchildren, Ashley, Ellisia, and Byron, Andy and wife Cora, Adam and wife Millie, Amanda and husband Brandon, Grace, Lillie, and Conrad; numerous great grandchildren; and sisters, Carol and husband Mike Glover Connecticut and Barbara and husband Mike Patch of Macy. She was preceded in death by her parents and a grandson Sean. A private funeral service for Mrs. DeVries will be held at Hartzler Funeral Home, Akron, Indiana. The private burial will take place following the service in the Metzger Cemetery, Miami County, Indiana. Visitation hours will be from 4 pm to 8 pm, Thursday, October 22, 2020 at Hartzler Funeral Home 305 West Rochester Street Akron, Indiana. Masks will be required for all in attendance. Donations can be made in her memory to the Trinity United Methodist Church 819 East 9th Street Rochester, Indiana 46975.

The family of Judith "Judy" M. DeVries created this Life Tributes page to make it easy to share your memories.

Send flowers to the DeVries family.