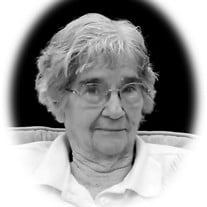 Joyce Louise Nicol Goss of Warsaw, Indiana passed into the presence of Jesus, her Lord and Maker at 2:45 pm, Saturday, August 29, 2015 at the age of 86. Joyce was born on April 5, 1929 in Arenzville, Illinois to Albert and Ida (Nobis) Nicol. She was 16 when her German Lutheran family moved to the big city of Savanna, Illinois to operate the Nicol Sand Company. She loved it there, because Savanna boasted a department store, dime store and movie theater. Joyce graduated from Savanna High School, in 1947, and married her high school sweetheart, Darwin Goss, on May 30, one year later. She was an uptown girl married to a boy from the other side of the tracks. He didn't buy her many things, but she followed him on adventures across two continents. She was resourceful with what she had, raising chickens, cooking family meals over an open wood stove, doctoring her children on the kitchen table, sewing their clothes, and still finding time and energy to bake and decorate special-request birthday cakes. She nurtured five boys and three girls with selfless patience, upheld by her unshakable faith in God, who was always her Fortress. She took great pleasure in her ever growing family. Children led to grandchildren then great grandchildren. She prayed for each of them by name. Joyce is predeceased by siblings Albert Nicol, Jr., Lee Nicol and Dwight Nicol; by her first stillborn daughter, Judy Louise Goss, and by Captain Justin (Patty Goss Peterson Harvey) Peterson. She leaves behind three siblings: Wilbur Nicol of Shannon, IL; Muriel Buck of Savanna IL; Shirley Ritchie of Savanna, IL; her husband of 67 years, Darwin Goss; eight of her nine children: Ken (Sherry) Goss of Clarkston, MI; Greg (Eunice) Goss of Kent City, MI; Sharon (Henry) Duncan of Modesto, CA; Larry (Kris) Goss of Etna Green, IN; Cathy (Tony) Webb of Johnstown, OH; Beth (John) Polsean of Syracuse, IN; Andy (Michele) Goss of Warsaw, IN; Jon (Serena) Goss of Warsaw, IN; 26 grandchildren (15 spouses) and 32 great-grandchildren. She also leaves a legacy of faithfulness to her husband and to her God, which continues to influence the lives of her 89 descendents and will stretch for generations to come. Time and Date of Services: 10:30 am, Wednesday, Sept. 2, 2015 Place of Services: Bourbon Bible Church 2002 12th Rd, Bourbon, IN 46504 Minister: Dr. Tony Webb Place of Burial: Harrison Center Cemetery, Etna Green, Indiana Visitation Hours: 4 pm to 8 pm, Tuesday, Sept. 1, 2015 at Bourbon Bible Church 2002 12th Rd, Bourbon, IN 46504 Memorial Contributions to: Warsaw Christian School 909 S. Buffalo St, Warsaw, IN 46580

Joyce Louise Nicol Goss of Warsaw, Indiana passed into the presence of Jesus, her Lord and Maker at 2:45 pm, Saturday, August 29, 2015 at the age of 86. Joyce was born on April 5, 1929 in Arenzville, Illinois to Albert and Ida (Nobis) Nicol.... View Obituary & Service Information

The family of Joyce L. Nicol Goss created this Life Tributes page to make it easy to share your memories.

Send flowers to the Goss family.