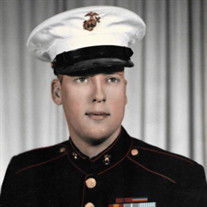 Joseph E. Harter, 89, of rural Akron, Indiana passed at 3:00 am, Wednesday, April 7, 2021 at Parkview Randallia Hospital of Ft. Wayne, Indiana. Joe was born on Jan. 21, 1932 in Rochester, Indiana to the late Wilbur Charles and Fern Mae (Taylor) Harter. He married in Nov. of 1959 in Chicago, Illinois to Beverley Martz, she survives. He was a 1950 graduate of Akron High School, where he was class president for all four years. He served his country in the U.S. Marine Corp during the Korean War, where he was wounded. He was honorably discharged from the military at the rank of Sergeant. He then graduated from Washington University of St. Louis with a Bachelor's Degree of Science in Mathematics and the University of Missouri Columbia with a Bachelor's Degree in Electrical Engineering. Joe was an engineer with General Motors of Kokomo for 27 years as well as a farmer. He always enjoyed his time working on the farm. He was a member of the American Legion of Kokomo and also of the Omega Church for many years. Joe is survived by his wife Beverley Harter; son Joseph Harter Jr. of Muncie; daughters Ruth Ann Harter of Akron, Mary Beth and husband Greg Gast of Akron, and Elizabeth Harter of North Manchester; grandchildren Derrick Harter, Thomas Gast, Christopher Harter, Taylor Gast, Jessica Harter, Megan Wagner, Sarah Wagner, Brayden Wagner; great grandchildren Elise Harter and Rienn Gagnon; and sisters Carolyn Largen of St. Louis and Suzanne Niles of Muncie. He was preceded in death by his parents and sisters Hester Jane, Esther Jean, and Mary Ann. Following his wishes private family services will be held with Pastor Thad Stewart officiating. The interment will take place in the Akron Cemetery, Akron, Indiana with graveside military rites in honor of his service. The arrangements have been entrusted to Hartzler Funeral Home 305 West Rochester Street Akron, Indiana. Donations can be made in Joe’s memory to the Wounded Warrior Project P.O. Box 758516 Topeka, Kansas 66675-8516.

The family of Joseph E. Harter created this Life Tributes page to make it easy to share your memories.

Send flowers to the Harter family.