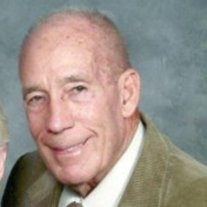 John D. Hunter, 84, Roann, met his Savior at 5:30 a.m. on Thursday, April 11, 2013, at Timbercrest, North Manchester. He was born March 30, 1929, in Milwaukee, Wis., to the late Clarion E. and Emma (Thompson) Hunter. He was a graduate of Laketon High School in 1947, where he enjoyed math and history, plus playing baseball and basketball. He married Barbara Duzenbery, Rochester, on March 12, 1950. She went to Heaven on April 1, 2012. John worked in construction most of his life. He worked for Fred O. Carey Construction in Warsaw, where he was the project manager for many big construction jobs, including Grace College and churches in Indiana and Tulsa, Okla. In 1963, he started his own construction company, John D. Hunter Building Service, and built over 300 homes, plus churches including Calvary Baptist in Wabash, where he later became a member. He built many of the independent living units for both Timbercrest and Peabody Home in North Manchester. He was known for his attention to detail and enjoyed the finishing trim details the most. He also farmed, and instilled that love to his grandson. John retired in 1995 and spent his time restoring antique and classic cars, traveling and helping others. John loved his family. They have two daughters, Brenda (Jeff) Ramseier, Silver Lake, and Connie (Bernie) Drew, North Manchester; and three very special grandchildren, Rachel (Alan) Davies, Savannah, Ga., Benjamin (Kristen) Ramseier, College Station, Texas, and Zachary (Amber) Ramseier, Roann. Other family members include a sister, Beverly (Henry) Phillabaum, Kokomo; sister-in-law, Shirley (Gene) Hunter, North Manchester; and brothers-in-law, Loyle Karns, Kokomo, Dick Duzenbery, Akron, and Don (Jan) Duzenbery, Plymouth. Two brothers and a sister have preceded him in death. A celebration of life service will be held at 11 a.m. Saturday, April 20, 2013, at Calvary Baptist Chruch with Pastor Matt Haynes officiating. Burial will be at Akron Cemetery, with a private family service. In lieu of flowers, memorials may be made to Calvary Baptist Church, Wabash, or the Wabash County Hospice.

The family of John D. Hunter created this Life Tributes page to make it easy to share your memories.

Send flowers to the Hunter family.