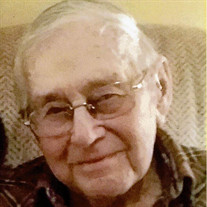 John E. Gaerte, 98, of rural Macy, Indiana went to be with the Lord at 6:37 pm, Saturday, June 27, 2020 at Woodlawn Hospital of Rochester, Indiana. John was born on Feb. 17, 1922 west of North Manchester in Wabash County to the late Ray M. and Annette E. (Schipper) Gaerte. On March 28, 1948 in Wabash, he married Kathryn L. “Katy” Gillespie, who preceded him in death on Jan. 30, 2006.   He was a graduate of Laketon High School. He was a World War II veteran serving in the U.S. Army as a part of 2nd Cavalry Brigade in the Philippines and Tokyo, Japan. John was a farmer. On the Gaerte Homestead Farm, he was a dairyman milking Holstein cattle and raising hogs as well as crops for over 70 years. He had been a member of the Zion Evangelical Lutheran Church in North Manchester for over 85 years. In that church, during the candle light Christmas Service in 1947 he placed the engagement ring on Katy’s finger and they celebrated 58 years of marriage before her passing. John was an avid NASCAR enthusiast cheering for Bill Elliott. He was always known to drive Fords and a couple Lincolns along with his Oliver tractors. He was recognized as a Veteran by the Northeast Indiana Honor Flight on June 21, 2011 for his sacrifice for his country. He was blessed with two children that survive, a daughter Marcia Cole and husband John, Akron; one son, John Mark Gaerte and wife Merry, Macy; four grandchildren LeAnn Scacco and husband Gary, Macy; Mark Gaerte and wife Nikole, Akron; Jenna Hillen and husband Josh, Akron; and John W. Cole, Long Beach, California.; great-grandchildren Piper Kathryn, Bailey, and Naomi Gaerte, Jacob, Dane, and Kaid Scacco, and Fiona Fish and Silvin Eilt Hillen, step great grandchildren Kodiak Hillen, Analeigh Hillen, Ryker Hillen. Also a sister Patricia Lucas of Fishers, Indiana. He was preceded in death by his parents Ray and Annette Gaerte, his wife Katy Gaerte, and a brother Herbert Gaerte Sr. Following county, state, federal, and CDC guidelines the funeral service will be held at 11:00 am, Thursday, July 2, 2020 at Hartzler Funeral Home 305 West Rochester Street Akron, Indiana with Pastors Amy Beitelshees-Albers and Jeff Hawkins officiating. For the health of all in attendance we encourage the public to wear masks. Burial will follow at Oaklawn Cemetery, North Manchester, Indiana with graveside military rites performed by the American Legion Post 286 of North Manchester, Indiana. Visitation is 5 pm to 8 pm, Wednesday, July 1, 2020 at Hartzler Funeral Home, Akron, Indiana. Donations can be made in John’s memory to the Wounded Warrior Project 4899 Belfort Road, Suite 300 Jacksonville, FL 32256 or to the donor’s choice of charity.

The family of John E. Gaerte created this Life Tributes page to make it easy to share your memories.

Send flowers to the Gaerte family.