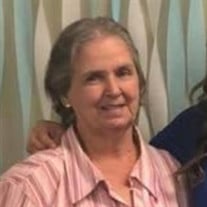 Jo Ann Craft, 76, of Akron, Indiana passed Wednesday, May 4, 2022 at her residence. Jo Ann was born on April 10, 1946 in Jackson, Ohio to the late Asa and Edna Katherine (Ault) Brofford. On Sept. 29, 1989 in Akron, Indiana she married Dale A. Craft Sr., he preceded her April 10, 2004. She attended Akron High School. She worked for Blue Bell, The Streamliner, Wynn Products, and United Technology of North Manchester. Jo Ann enjoyed planting flowers and sightseeing driving all around the country. She was a collector of many glass paperweights and angels. She always loved Christmas decorating, but most of all she enjoyed spending time with her grandkids. She is survived by her children Todd and wife Michelle Hoffman of Akron, Corey and wife Mickie Hoffman of Macy, and Lori Hoffman of Akron; grandchildren Damon, MacKenzie, Dylan, Gabby, Dominque, and Chad; 4 Great Grandchildren; sister Peggy Schroll and special friend Jim Shriver of Rochester; and a sister-in-law Marilyn Brofford of Akron. She was preceded in death by her parents, her husband, and a brother Asa R. Brofford. Following her wishes no services will be held at this time. The arrangements have been entrusted to Hartzler Funeral Home 305 West Rochester Street Akron, Indiana.

The family of Jo Ann Craft created this Life Tributes page to make it easy to share your memories.

Send flowers to the Craft family.