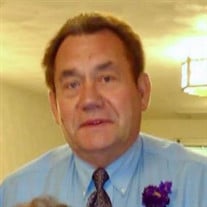 Jesse Russell Gunnels, 74, of Rochester, Ind. and formerly of Robertsdale, Alabama and Mentone passed at 5:40 pm, Thursday, September 30, 2021 at Woodlawn Hospital of Rochester, Ind. Jesse was born on June 27, 1947 in Maytown, Kentucky to the late William and Ruth (Ousley) Gunnels. On December 24, 1966 in Clintwood, Virginia he married Judith K. Click, who preceded him in death on Feb. 15, 2010. He then married Sandra (Kopecy) Parker on Aug. 20, 2010 in the Biblical Gardens of Warsaw, she survives. He was a graduate of Maytown High School in 1965. He retired from Dalton Foundry after 39 years as a steelworker. He attended the Rochester Church of Christ and had previously attended the Full Gospel Tabernacle Church of Claypool. Jesse enjoyed fishing and collecting knives as well as watches. He loved to socialize and be around friends and family. He was known as a friendly face at his favorite restaurants, Teel’s and The Streamliner. Jesse loved to take day trips around the area. He will be missed by his beloved dogs Ricky and Lucy. He is survived by his wife Sandy Gunnels of Rochester; daughters Yavonna and husband John Dotson of Silver Lake, Aggie and husband David Prater of Mentone, Angela and husband Mark Hancock of Rochester; a son Jesse T. and wife Kia Gunnels of Mentone; grandchildren Christopher, Seth, and Emily Dotson, Zachary and Noah Prater, Alycia and Justin Porter, and Mia, Sophina, Olivia, twins Jesse Lee and Carter Alan Gunnels; great grandchildren Selah and Bowman Russell Dotson and Remington and Finley Dotson; a brother James and wife Sandra K. Gunnels of Mentone; sisters Lilly Brown of Macy and Ellen and husband Danny Slone of Kentucky. Jesse was preceded in death by his parents, first wife Judith Gunnels, a grandson David Aaron Prater, brothers Sherman, Ivan, Charlie, Millard, and Arnold Gunnels and sister Maggie Stevens. The funeral service will be at 1:00 pm, Monday, Oct. 4, 2021 at Hartzler Funeral Home 305 West Rochester Street Akron, Indiana with son-in-laws John Dotson and David Prater officiating. The interment will take place in the Graceland Cemetery, Claypool, Indiana next to his wife Judith. Visitation hours will be from 11 am to 1 pm, Monday, Oct. 4, 2021 at Hartzler Funeral Home 305 West Rochester Street Akron, Indiana Donations can be made in Jesse’s memory to the family.

Jesse Russell Gunnels, 74, of Rochester, Ind. and formerly of Robertsdale, Alabama and Mentone passed at 5:40 pm, Thursday, September 30, 2021 at Woodlawn Hospital of Rochester, Ind. Jesse was born on June 27, 1947 in Maytown, Kentucky to the... View Obituary & Service Information

The family of Mr. Jesse R. Gunnels created this Life Tributes page to make it easy to share your memories.

Jesse Russell Gunnels, 74, of Rochester, Ind. and formerly of...

Send flowers to the Gunnels family.