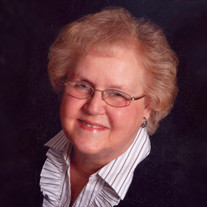 Janet H. Wood, 79, of rural Akron, Indiana passed at 6:23 am, Wednesday, Jan. 8, 2020 at Lutheran Hospital of Ft. Wayne, Indiana. Janet was born on April 18, 1940 at her parents’ home near Akron to the late Frederick L. and Mildred E. Hammond. Janet was an elementary school teacher for Akron School and for Rochester Schools teaching at Columbia and Riddle. She taught for over 35 years and retired in 2004. She had also taught a GED class in Augsburg, Germany in the early 1960’s. She was a 1958 graduate of Akron High School. She then graduated from Manchester College and also attained her Master’s Degree from Ball State University. Janet attended the Akron Church of God for her entire life where she started teaching Sunday School at the age of 16. She also was involved with Junior Church for many years. She was known for being in the AJ’s, trios, duets, and the choir. She was the accompanist for the church, playing the piano, for over 60 years until the last month. She was an avid reader and was involved with Friends of the Library in Akron. She enjoyed traveling which included the U.S., Mexico, and Europe. Survivors and place of residence: Daughter – Angela Wood Bailey - Ft. Wayne, Ind. Son – Andrew and wife Heidi Wood - Middlebury, Ind. 5 Grandchildren - Hillary, Olivia, Elise, Thomas, Isaiah 2 Great Grandchildren - Joel Thomas and Carter Sister – Karen Camp Drone - Sarasota, Florida Brother - Gail and wife Brenda Hammond - Clermont, Florida Several Nieces, Nephews, and Cousins Preceded in Death By: Parents – Fred and Mildred Hammond Sister and Brother-in-Law – Judith and Tom Hill Infant Brother – Gary Walter Hammond Former Husband of 25 years - Larry L. Wood Brother-in-Law – Don Drone The funeral service will be at 10:30 am, Monday, Jan. 13, 2020 at Akron Church of God 301 South West Street Akron, Indiana with Pastor Kathy Nelson officiating. The burial will take place following the service in the Akron Cemetery, Akron, Indiana. Visitation hours will be from 2 pm to 5 pm, Sunday, Jan. 12, 2020 at Hartzler Funeral Home 305 West Rochester Street Akron, Indiana. Donations can be made in Janet’s memory to the Akron Church of God.

The family of Janet H. Wood created this Life Tributes page to make it easy to share your memories.

Send flowers to the Wood family.