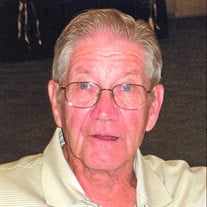 James L. Sriver, 82, of Akron, Ind. passed away at his home on Tuesday, September 26, 2017. Born on Jun 10, 1935 in Wabash County, he was the son of Estil and Anna Sriver. Jim was a proud graduate of Akron High School. He was a U.S. Army veteran and worked for White Metal Rolling and Stamping of Warsaw for over 25 years and then Pike Lumber Company for 17 years prior to retiring in 1997. He enjoyed the outdoors especially taking care of his yard as well as others. He is survived by his wife of 58 years, Marga (Flucke) Sriver; son James Jr. of Akron, IN; daughter, Michele (Fred) Bickel of Warsaw, IN; sister Mary Grant of Denver, IN; Grandsons, Nate Bickel of Louisville, KY., Dustin and Daniel Sriver of Robbinsville, NC as well as several nieces and nephews. He was preceded in death by his daughter Jennifer Sriver; parents Estil and Anna Sriver, brother, John Sriver; and sister, Geneva Hamilton. Time and Date of Services: 1:00 pm, Thursday, Sept. 28, 2017 Place of Services: Hartzler Funeral Home 305 West Rochester Street Akron, Indiana Minister: Pastor David Eaton Place of Burial: Akron Cemetery, Akron, Indiana where a military funeral honors ceremony will be preformed. Visitation Hours: 11 am to 1 pm, Thursday, Sept. 28, 2017 at Hartzler Funeral Home, Akron, Indiana In lieu of flowers make donations to: Kindred Hospice in Memorial to James “Jim” Sriver.

The family of James L. Sriver created this Life Tributes page to make it easy to share your memories.

Send flowers to the Sriver family.