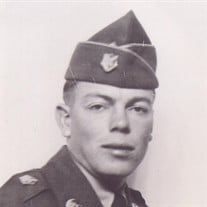 James McIntosh, 82, of Tippecanoe, Indiana passed at 3:47 am, Sunday, Feb. 21, 2016 at Kosciusko Community Hospital of Warsaw, Indiana. He was born on May 19, 1933 in Irvine, Kentucky to John and Martha (Frazier) McIntosh. He was married on... View Obituary & Service Information

The family of James McIntosh created this Life Tributes page to make it easy to share your memories.

Send flowers to the McIntosh family.