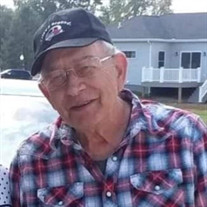 James Lee “Jim” Bucher, 85, of Akron, Indiana passed at 5:24 pm, Saturday, Feb. 5, 2022 at Lutheran Hospital of Ft. Wayne, Indiana.  Jim was born on Aug. 14, 1936 in Akron, Ind. to the late Earl D. and Ruth May (Lukens) Bucher. He married on Sept. 23, 1956 in the Disko United Methodist Church to E. Joan Floor, who preceded him in death on Oct. 1, 2017. He attended Beaver Dam High School. In earlier years, he worked for General Tire. He then moved to California for a short time doing contracting work.  When he returned to the area, he became an Automotive Mechanical Technician.  He worked for many dealers throughout the area, which included Gagnon’s, Shepherd’s, Petro’s, and Smith’s. Jim worked every day of his life. Jim served as the Manager of the Warsaw Motor Speedway until the time of its closing.  Racing was a lifetime passion and he built many race cars. He won championships at Warsaw, Kokomo, and Avila driving late model stock cars. He had been a member of several local car clubs and oversaw the 4th of July and the Warsaw Car Shows. He also served the community as a part of the Akron 4th of July Committee for many years. He and his wife enjoyed camping at Jellystone Park for many years. He was known as a regular around Akron. He could be found most days at Jonesy’s Junction on his golf cart, solving the issues of the day. He is survived by his daughters Joy L. and husband Robert L. McDonough of Rock Lake, Ind. and Amy and husband Dustin Cooper of Akron, Ind.; sons Jerry Bucher and fiancee Linda Carroll of Oswego, Ind., Jeff Bucher (Paula Platt) of Akron, Ind., and Jim Jr. and wife Mary Bucher of North Manchester, Ind.; 12 Grandchildren; 20 Great Grandchildren; and 4 Great Great Grandchildren; and siblings Myra Wade, Elbie Bucher, and Tom Bucher.  Jim was preceded in death by his parents, his wife Joan, a sister Linda Utter, daughter-in-law Marilyn K. Bucher.    The funeral service will take place at 10:30 am, Thursday, Feb. 10, 2022 at Hartzler Funeral Home 305 West Rochester Street Akron, Indiana. The interment will take place in the Silver Creek Cemetery, Silver Lake, Indiana next to his wife.  Visitation hours will be held from 3 pm to 7 pm, Wednesday, Feb. 9, 2022 at Hartzler Funeral Home, Akron, Indiana.  Memorial contributions can be made in Jim’s memory to the Akron Chamber of Commerce to be used for the Akron 4th of July.

The family of James "Jim" Lee Bucher created this Life Tributes page to make it easy to share your memories.

Send flowers to the Bucher family.