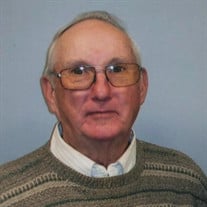 James Allen Bates, 86, of Bourbon, Indiana passed at 12:40 am, Monday, Jan. 17, 2022 at Woodlawn Hospital of Rochester, Indiana. James was born on Aug. 4, 1935 in Marshall County, Indiana to the late Harry W. and Olive H. (Ecker) Bates. He was a lifelong resident of Bourbon, living at his present home for 60 years. He graduated from Bourbon High School in 1953, where he played baseball, basketball, and was in the band. He also was active in FFA, and served as a State Officer. He furthered his education serving in the ROTC at Purdue University. James married Margaret Louise Hall, his high school sweetheart, on April 8, 1956 at the Bourbon First United Methodist Church. He is survived by his children James Bates Jr., Jo Bates, Judith Weissert and husband Marc, Jon Bates and wife Kim; 6 Grandchildren; and 11 Great Grandchildren. James was preceded in death by his parents, wife of 58 years Margaret Louise Bates, a brother Jay F. Bates, and a sister Barbara Faulkner. James was a lifetime farmer of grain and cattle. He drove truck for his brother hauling livestock to the Chicago Stockyards as well as being employed at Metheny Elevator, feed truck driver for Farm Bureau Co-Op, Ferros of Plymouth, and a part-time driver for Shells of Bourbon, where he retired. James was a 10 year 4-H member and served as a 4-H leader and on the 4-H County Council. He served his community as the Tippecanoe Township Trustee for a term. He was a member of the Silver Dollar Saddle Club, the Bourbon Antique Tractor and Engine Show, and the Bull Haulers Group. He loved to chat with people wherever he went on his pickup or Ranger rides with his dog Max as well as at the Etna Green Café. A graveside service will take place at 11:00 am, Saturday, Jan. 22, 2022 in the Pleasant Hill Cemetery of Bourbon, Indiana. The arrangements are entrusted to King Memorial Home 101 North Tucker Street Mentone, Indiana. In lieu of flowers memorial contributions can be made in his memory to the donor’s choice of charity.

The family of James Allen Bates created this Life Tributes page to make it easy to share your memories.

Send flowers to the Bates family.