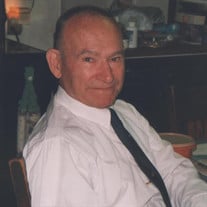 Jack E. Swihart, 89, of Gilead, Indiana passed at 10:53 pm, Thursday, April 8, 2021 at his residence. Jack was born on July 13, 1931 in Akron, Indiana to the late Russell L. and Carrie I. (Churchill) Swihart. He married on Dec. 3 1955 in Athens, Indiana to Anne Rhodes, she preceded him in death on Aug. 20, 2009. Jack was a 1949 graduate of Akron High School. He served his country proudly in the U.S. Air Force stationed in England. He retired from General Tire of Wabash, Indiana after 37 ½ years. He also was transportation for the Amish community for many years. Jack enjoyed hunting, fishing, and trapping. He was known for videotaping everything and wearing his white shoes. He was an avid collector. He had many arrowheads, coins, watches, and small banks. Jack was a card player, but only by his own rules. He loved watching basketball and NASCAR as well as playing badminton. He is survived by his daughter Kim and husband Dave Yoder, Mexico; sons Stuart and wife Cindy Swihart, Goshen, and Brett and wife Julie Swihart, Bourbon; 8 Grandchildren; 8 Great Grandchildren; sisters Norma and husband James Lee of Mentone and Judy Montague and companion Jim Wolfe of Akron; and extended son Bub Cormican, Athens. He was preceded in death by his wife Anne Swihart, sons Kelby and Ricci D. Swihart. The funeral service will be at 10:30 am, Tuesday, April 13, 2021 at Hartzler Funeral Home, 305 W. Rochester St., Akron, Indiana. The interment will take place in the Gilead Cemetery, Gilead, Indiana where graveside military rites will be performed by the Fulton County Honor Guard. Visitation hours will be from 4 pm to 7 pm, Monday, April 12, 2021 at Hartzler Funeral Home, Akron, Indiana. Donations can be made in his memory to the Fulton County Animal Adoption and Education Center 1540 N. Wentzel St. Rochester, IN 46975 or the Scratching Post Cat Rescue 600 Chili Ave. Peru, IN 46970.

The family of Jack E. Swihart created this Life Tributes page to make it easy to share your memories.

Send flowers to the Swihart family.