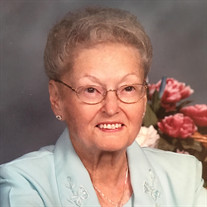 Iris M. (Boganwright ) Davis, 91 of Mentone, Ind. passed away at 10:24 AM on Wednesday, April 26, 2017 at Millers Merry Manor, Warsaw, Ind. from complications of a stroke suffered on April 17. She was born the second of four children on March 22, 1926 in Marshall County, Ind. to Leonard and Treva Harsh Boganwright. On March 14, 1946 she “ran off” to Bluffton, IN with Emory “Ike” Davis to get married after a six week courtship. They shared over 50 years of marriage before Ike’s passing in December of 1996. She was a homemaker. In her youth she attended school at Tippecanoe and Beaver Dam. She was a proud graduate of Beaver Dam High School. Iris enjoyed spending time with family and friends playing euchre and dominos. She was known for telling jokes, silly rhymes and her favorite saying was “I’ve got a little story to tell you”. One never knew what kind of story she would tell. She loved to bake cookies, cakes, and pies and make candies, especially carmels and peanut butter fudge. She enjoyed sharing with family, neighbors and friends at the Mentone Nutrition Site. Her favorite pastime was watching games that her family participated in at the Mentone Youth League. She was known for giving treats after the game. In 2007 the Youth League honored her with a plaque for her dedication and generosity. She cherished that award and displayed it proudly in her home and her room at Miller’s Merry Manor for all to see. In 1997 she began attending the Mentone United Methodist Church and was a faithful attendee until she moved to Miller’s Merry Manor in the fall of 2014, due to failing health. She made many friends and had a new audience for her jokes and stories. There she met new friends who joined her in playing euchre and late night games of dominos. She loved all her caregivers and they loved her. Survivors and place of residence: Daughters: Beverly (Terry) Faulker, Winona Lake, IN and Debra Garee, Mentone, IN Granddaughters: Stacy (Ryan) Davis, Fort Wayne, IN and Jill (Phillip) Prater, Silver Lake, IN Great Grandchildren – Luke and Noah Prater and Camden and Kinley Davis Also surviving are her sister, Lois Miller, Mentone, IN and sister-in-law Juanita Boganwright, Claypool, IN as well as many nieces and nephews Preceded in Death By: her parents, husband, Ike, brothers, Donald and Richard Boganwright, and son-in-law Robert (Bob) Garee Time and Date of Services: 10:30 Monday, May 1, 2017 at King Memorial Home, Mentone, IN Place of Services:King Memorial Home, Mentone, IN Minister: Pastor Jason Rice Place of Burial: Mentone Cemetery, Mentone, IN Visitation Hours: 2 to 5 , Sunday, April 30, 2017 at King Memorial Home, Mentone, IN Memorial Contributions to: Mentone Youth League, Mentone Nutrition Site or Miller’s Merry Manor Activity Department

Iris M. (Boganwright ) Davis, 91 of Mentone, Ind. passed away at 10:24 AM on Wednesday, April 26, 2017 at Millers Merry Manor, Warsaw, Ind. from complications of a stroke suffered on April 17. She was born the second of four children on March... View Obituary & Service Information

The family of Iris Davis created this Life Tributes page to make it easy to share your memories.

Send flowers to the Davis family.