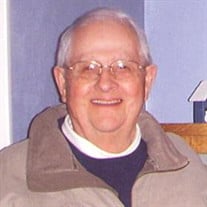 Howard W. Fawley, 86, of Mentone, passed away at 11:25 a.m. Wednesday, April 22, 2015, at Millers Merry Manor, Warsaw, after being in failing health for two years Born on Jan. 23, 1929, in Kosciusko County, to Milo and Mildred (Dunnuck) Fawley. Howard was married on Aug. 28, 1949, in Etna Green, to Peggy F. Agens, and she survives He retired from Choretime-Brock, of Milford. He also worked as an automobile salesman for Petro GM, of Warsaw, for several years. Howard was a 1946 graduate of Mentone High School. He was a member of the Mentone United Methodist Church for more than 50 years. He was also a member of the Masonic Lodge where he had been master and held many other positions and the Scottish Rite of Fort Wayne. He was a loyal Cubs fan, and he was a fan of Tippecanoe Valley High School basketball and football. He could always be found sitting in his front row seat with his good friend, Dale McGowen. Every year, he delivered sweet corn to the community with Don Craig. He was also a regular in the mornings at Teel’s Family Restaurant. Howard always kept an immaculate yard and enjoyed fishing. Survivors include his wife, Peggy Fawley, Mentone; daughters Linda and husband Mike Ault, Claypool, and Sandra and husband Garry Wise, Mentone; grandchildren Angela DePalma, Chris and wife Sarah Ault, Scott Wise and Anne and husband Chris Taelman; and nine great-grandchildren. He was preceded in death by his parents and his brother and sister-in-law, Jack D. and wife Betty Fawley. His funeral service is 2 p.m. Saturday, April 25, 2015, at King Memorial Home, 101 N. Tucker St., Mentone, with Rev. Amber Karkosky-Litten officiating. Visitation is noon-2 p.m. Saturday, April 25, 2015, at the funeral home. Burial is at Mentone Cemetery. Memorial contributions may be made to Mentone United Methodist Church.

The family of Howard W. Fawley created this Life Tributes page to make it easy to share your memories.

Send flowers to the Fawley family.