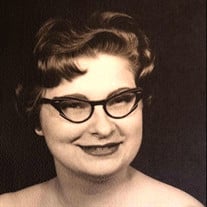 Harriet Whallon died peacefully surrounded by loving family in Potomac, MD on Monday February 18, 2019. Harriet was born to Sarah Katharine and Dr. Evan Arthur Whallon on October 28, 1936 in Akron Indiana. She graduated from Akron High School with the class of 1953 at the age of sixteen, and then attended Indiana University where she received a BA in history with a minor in English in 1957. She began her career in computer programming working for the Bureau of Public Debt in Parkersburg, WV, then for Associated Transport in New York, NY. In 1968, when her father was aging rapidly, she moved to Indianapolis, IN so she could be closer to home and care for him on weekends while she worked at the US Army Finance Center. She stayed in Indianapolis until 1981 when she relocated to Alexandria, VA in 1981 to work again for the Bureau of Public Debt. She was commended for her ‘technical expertise and tireless efforts’ at the Bureau with The Annual Patrick J. Mulligan Service Award in 1988. She excelled at the detailed work required to keep our public debt accounts in order, and for her ‘perseverance and dedication’ in her role in the department on Treasury Bill Conversions, she was awarded the Dellbert Jellatin Award in August of 1992. Later that year she transferred to work at the Internal Revenue Service until her retirement in June of 2000. Blessed with a music-loving family, Harriet learned to play the flute and other instruments from her mother and Aunt Debbie Strong who was a Choir Director for many years at the United Methodist Church in Akron. After leaving home, she developed a passion for attending opera, orchestral music and dance performances wherever she lived. She was a tireless supporter of her brother Evan Arthur Whallon, Jr’s work as Conductor &Music Director for Columbus Symphony Orchestra and the Chautauqua Opera Association in Upstate New York. Harriet was well read and throughout her life enjoyed staying well informed, especially by savoring the daily pages of the New York Times. She routinely contributed to a number of wildlife and animal charities, and had a special fondness for bears. Harriet, known as “Poochie” by her family, was a loving and generous woman who enjoyed travelling with her sister and visiting her nieces and nephews with their growing families. In later years, she greatly enjoyed gathering with her former classmates at the reunions of her high school alma mater. She is pre-deceased by her brother Evan Arthur Whallon, Jr., and her sister M. Jeanne (nee Whallon) Burrous. She is survived by nieces Dr. Sarah E. Atanasoff, Dr. Mary B. O’Malley and Dr. Beth A. Burrous,and nephews Paul E. Whallon and Eric A. Whallon. Funeral service will be held at the United Methodist Church in Akron, IN on July 27, 2019 at 11:00 am.

The family of Harriet Dianne Whallon created this Life Tributes page to make it easy to share your memories.

Send flowers to the Whallon family.